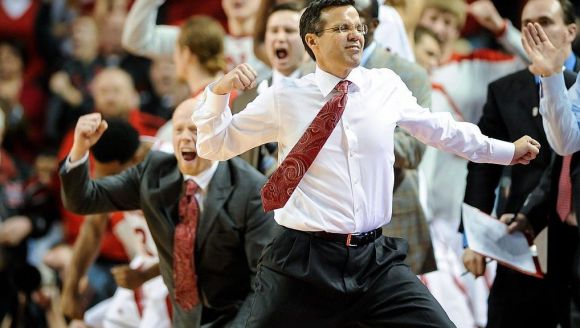 While the NCAA Tournament field has yet to be determined, the Madness of March has clearly begun, specifically in the Big Ten.

The completely mediocre Nebraska Cornhuskers entered the tourney as the 13th seed, so expectations were understandably low.

However, they were able to knock off an equally mundane Rutgers squad in their opening matchup.

The tens of Huskers fans in attendance were quite pleased, but head coach Tim Miles was practically overwhelmed with giddiness.

In fact, this state of ecstasy appeared to cripple his basic motor skills.

Tim Miles with the most graceful coach stumble of the postseason 😂pic.twitter.com/ckFma5eO1k

Yikes, that was a nasty spill from the Buster Keaton of college basketball.

Coach Miles proved to be impervious to both pain and embarrassment, popping right back up and executing baseball's sign for safe.

Dude was even able to laugh at himself later in a moment of quiet reflection.

Nebraska rode the momentum of Miles' slapstick into Thursday, beating the Maryland Terrapins to somehow advance to the Big Ten quarterfinals.

Sadly, this strange ride ended at the hands of Bucky Badger, as the Huskers fell to Wisconsin, 66-62.

With a record of 18-16, Nebraska won't be in the field of 68, which is a blow to fans of vaguely competitive basketball and physical comedy alike.