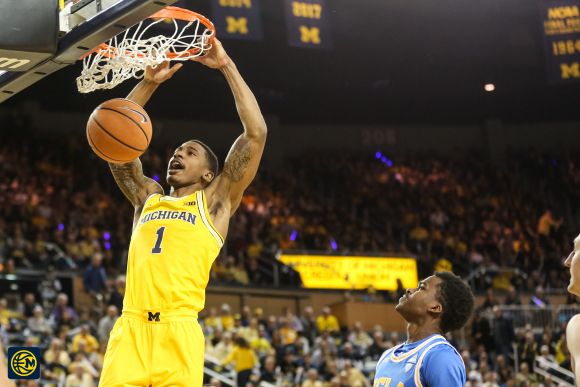 Let's meet a dude who perservered:

Like all elite athletes, Charles Matthews wanted to play, but Cal had another group of five-star recruits on the way.

A four-star recruit would have a hard time playing in front of a five-star recruit at Kentucky. You don't get time to get better there. You either produce ASAP or leave campus after nine months. If you don't, you wind up at the end of the bench with the white guys.

Matthews felt like he could play and perform at a high level. Dude chose to transfer to Michigan.

After sitting out the obligatory transfer year, he's become what Coach Cal never has yet always needs. He's also playing while coach Cal and his Wildcats are watching.

Matthews is a junior!

Dude chips in 13 points a game -- 6.5 in the NCAA  Tournament -- grabs about 6 rebounds per game, and is described as an elite defender.

He can't get on the floor at Kentucky, but he was just named the West Region's Most Outstanding Player! As the young people say ...

Kentucky could sure use a player like Charles Matthews, but they let him get away.  Sometimes when you get three-, four-, and yes, even five-star recruits, you just might have to coach them for two or three years before they reach their peak.

That's not going to happen in Lexington. Coach Cal continues to turn out kajillionaires and continues to fail to hang anymore NCAA title banners at Rupp Arena.

Congrats to Charles Matthews! Sometimes a journey takes a few different turns. Congrats to Michigan for taking the time to coach this young man and make him better. I could have sworn that was what coaching was all about.

I wonder if Coach Cal will be watching and wondering, what if?