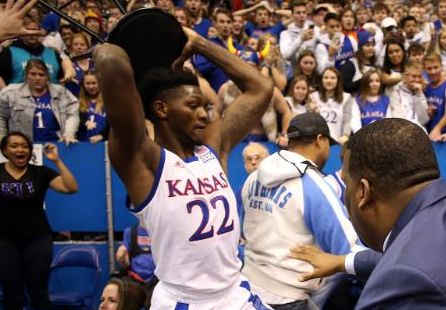 Little did anyone know that what transpired in the Illinois-Purdue game was just an undercard.

Those Big Ten rivals were mutually escalating tensions from the early stages onward.

Unfortunately, for one player, the heat of the moment got too much for one of them.

That's when the Illini's Alan Griffin decided to update the Bristol Stomp:

"That's just absolutely ridiculous, uncalled for and he should be gone."

Illinois' Alan Griffin was ejected after stepping on a Purdue player. pic.twitter.com/LzG9GWqkap

As not-cool as that was, it paled in comparison to the chaos to what went down in Lawrence, Kansas not long after.

And when college hoopsters start swinging stools, it's one of those times.

OK, we get the NCAA's newly-installed finish the game rule. No matter what, sports administrators have to take gambling into account. Bad beats are funny to everyone except those who get hit with them.

Still, in endings like this game's, that's a bitta overkill. Accepted sportsmanship in hoops is the time for scoring is over in the last possession when the outcome's already been decided.

When the possibility exists for a player to ignore this, there's always gonna be potential for trouble.

So, screw the gambling angle. That rule encourages the possibility of bad behavior breaking out.

There's a better way to curtail a meaningless possession. Some leagues in Europe simply eliminate it. The trailing team signifies it by simply putting the ball down behind the halfcourt line. White flag. It's been a slice. We'll get you next time.

Wildcat coach Bruce Weber sounds like he'd be OK with that as a last resort:

Weber said he told his team to "back off" at the end instead of trying to pressure #KUbball in the final seconds. That was the catalyst for the ugly scene.

For an instant, though, it sure looked like that cop in the light blue shirt was entertaining thoughts of telling Silvio De Sousa that he was gonna pay a visit to the police station.

Not sure which woulda been worse.

It's odds-on, though, that these rivals are gonna see a lot more of that dude's buddies when they meet in the Little Apple on Sat 29 Feb.

Clearly, both teams will get the lecture before they even take the court, but police presence levels could still be the real over/under in that one.