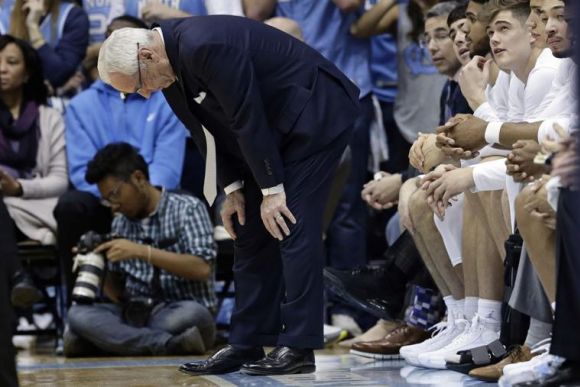 Everyone knows it sucks to suck, but twice in one game?

That's a major tribute to suckage.

The Tar Heels out-sucked themselves against heated rival Duke in this one, first allowing a last-tick putback to complete a collapse in regulation and then getting caught flat-footed to lose in overtime, 98-96.

Nothing a last-second blockout couldn't have fixed.

Dudes spent the game's first 35 minutes taking firm control of the proceedings, ultimately building a 13-point lead with just over what shoulda been four minutes left in the game. It looked like this was indeed a further example of tossing out the record books when these two get together.

Duke was still 5-down with 20.9 seconds to play in regulation. After that, it just got crazy.

Suffice to say Mike Krzyzewski kept his charges on-point and attentive to detail.

Whatever Williams had from seasons past is nowhere to be found this time around. Apparently last year's five top scorers -- all gone -- took it with them.

That no-call in the final seconds summed up the Heels' campaign to date, namely that bad breaks happen but it's not like they should even have been a factor. UNC surrendering 14 offensive rebounds to Duke was much more of one.

It just is, and on so many levels.

None of which have a hint of Carolina blue in them.