3 of the NET Rankings' Top 4 Bite It Tonight 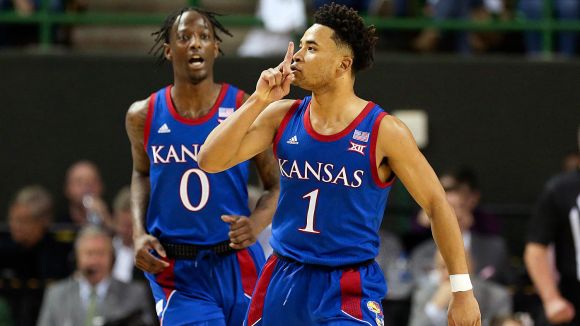 At first, appearances were the NCAA Tournament's projected top seeds were in for a shake-up.

However, when the day's dust had settled, it looked more like a re-configuration instead:

As a result, all that basically happened as a shuffling of deck chairs, compliments of the NCAA Evaluation Tool, aka the NET Rankings.

What are the NET Rankings?

Here's EVERYTHING you need to know. Be on the lookout for the first release 👀 pic.twitter.com/kdZwDEjFPS

What else is there to say but, hooray math!

The question remains, though, can the civilized world rely on this new algorithm?

Proof yet again that things go better with alchohol.

Hardline chalk-liners probably spent the late hours Saturday drowning their sorrows and lamenting their lighter wallets because of the top-liner massacre that took place.

The Jayhawks avenged their first-ever home loss to Baylor by controlling their rematch, enduring a late Bear surge, and then sealing the deal in the dying moments:

It'd be a surprise if they don't meet again in the Big 12 tourney.

Meanwhile, out West, it got a little wild. Gonzaga had mopped the floor with BYU when the Cougars visited the Kennel in January. Since then, BYU got better.

They'd tagged the rematch as Senior Night before the season even started, and with 18,000 fans adding to the adrenaline rush, TJ Haws & Co shot the lights out:

The time has passed from the West Coast Conference being Gonzaga & the 9 Dwarfs. Current BPI projections easily have the Zags, Cougars, and Saint Mary's Gaels making the Dance.

That's more bids than either the Pac-12 or the SEC are likely to get as matters stand right now.

The Aztecs were edged at home by a Runnin' Rebel squad that's now 16-14 overall and 4-7 on the road. It's safe to say this upset just made their season:

The NET upshot as it stands right now is obvious:

The refreshing aspect of college hoops is this upshot is merely a snapshot.

The season's entering that stage where drastic stuff can happen. It will somewhere because it always does. The task for the top liners now is to hold serve in the wake of obvious proof that they're all vulnerable.

15- and 16-seeds will be too ecstatic about making the Dance to care who they meet. 2-, 7-, and 8-seeds will be much more observant of potential pairings. It's finally time to truly start paying attention.