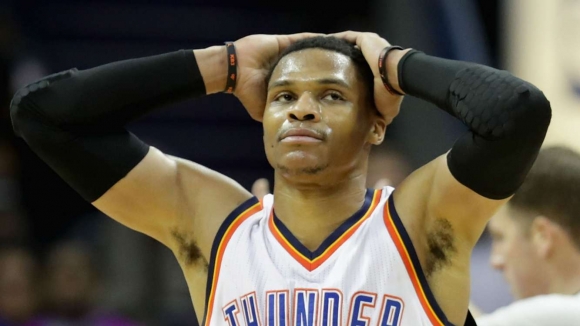 All-Star competitions, typically, aren't taken very seriously by both the participants and the fans.

Anyone who's attaching any relevance to them should stop doing so at once.

However, that being said, there's an occasional development that points out the utter ridiculousness of the entire process.

Russell Westbrook won't be starting for the Western Conference All-Stars.

Dude's currently averaging a triple-double per game and leading the league in scoring.

However, he'll merely be a reserve in New Orleans.

This complete miscarriage of justice is not taking place in some bizarro world or parallel universe, either.

It is happening right here in modern day 'Murica, in this year of our lord 2017.

Of course, this is just a silly anomaly of the new voting system, with fans accounting for half of the vote. The other half is split between the media and the players.

If it was left completely up to the fans, NBA legend Zaza Pachulia would be an All-Star starter.

As a society, we may not be fully prepared for that reality.

For his part, Westbrook isn't at all concerned with this silliness.

While his peers and teammates remain confused by the snub, the two-time All-Star game MVP will just continue his historic season, perhaps even using the slight to motivate himself further.

The rest of the league just collectively winced.