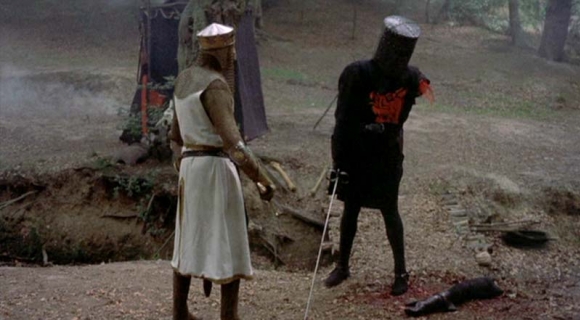 Chris Hansen's attempt to bring the NBA back to Seattle may be severely wounded, but he remains unfazed.

To borrow from the bandidos in John Huston's Treasure of Sierra Madre:

And thus, the neo-Sonics have raised the ante yet again, dangling an increased bid for what is currently termed the Sacramento Kings franchise that would raise its valuation to a staggering $625million.

Just know, though, that the battle for the Kings is not a white hat/black hat scenario:

Remember, all the NBA's re-location committee did was recommend that the Kings' sale be rejected. Yes, it was unanimous, and yes, one would think that would have sent a loud-and-clear message to all involved. But nothing is ever loud and clear when 1%ers want something.

Ranadivé went straight to the wallet when he took advantage of his position as a minority owner of the Golden State Warriors to cut a side deal with his fellow ownership groups. In short, he offered to withdraw from revenue-sharing arrangements to the tune of benefitting each team up to $20million per season. It clearly was a factor in the committee's decision.

So, the neo-Sonics decided to fight cash with more cash and upped the bid. The revenue-sharing pool in question was established to assist lower-revenue teams, and Ranadivé's deal was that the Kings wouldn't participate in it. Hansen's new offer promises to pay into that pool as a sweetener in addition to the group's putting an increased pile of cash on the table. The reality is this would be a foregone conclusion if the team moved to Seattle. It's a Top 15 market; Sacramento sits at No 27.

With such side deals setting precedents and the stratospheric valuation of the Kings franchise, the specter of expansion in the near future increases. Stern has been adamantly opposed, but he's gone in February and there is already a cabal of owners who would consider striking while the fire is hot.

This entire episode serves as a reminder not only of how much dosh there is to be made in professional sports ownership -- -- in annual profits and/or windfall profits when the franchise is sold -- so never forget who is ultimately paying the bulk of the tab: the 99%ers:

And Hansen, as a hedge-fund manager, is well aware of how to leverage other people's money.