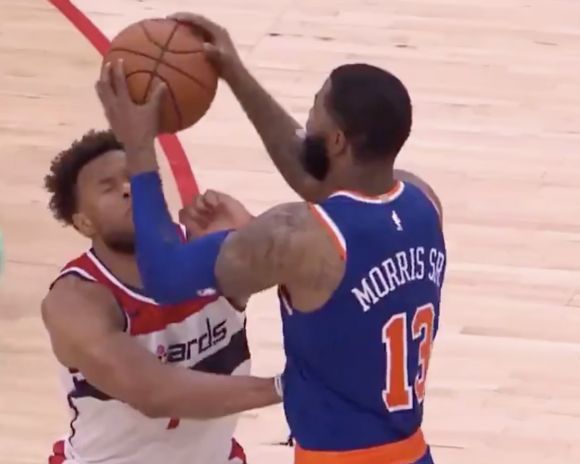 It appears the New York Knicks are using the pre-season as a means to establish their presence with authority in the NBA's Eastern Conference.

The gauntlet was formally tossed early in the third quarter of their very first exhibition game against the Washington Wizards.

The messenger was brand new Knick Marcus Morris, formally of the Boston Celtics and several other franchises.

For whatever reason, this important missive was sent through a random act of senseless on-court violence:

Let's pause for a moment to reflect on the deeper meaning of that ball to the forehead.

For whatever reason, the broadcast team was assigning blame to the Wizards' Justin Anderson, who was the recipient of the head ball.

According to them, dude's out there solely to get under the opponents' skin by playing sound defense.

Anyway, Morris attempted to clarify the message after his ejection:

After being ejected in a preseason game tonight, Marcus Morris has a message on behalf of the Knicks:

"We not taking no s**t" pic.twitter.com/AjMUwG8J4m

We're still a bit fuzzy on how that play translates into what he's saying, but we wish him the best of luck.

At least his coach seems to understand:

The Knicks are doomed.