KD Goes Down; Warriors in Trouble 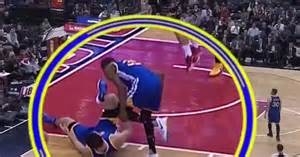 The entirety of the Internet knows.

The Dubs still put together a 73-win season.

Plus, they were probably a Draymond Green Game 5 suspension away from being back-to-back champs.

How could a team that broke the NBA regular season wins record possibly hope to improve?

How about adding a former scoring champ and league MVP in Kevin Durant?

We all remember last Fourth of July when Durant shocked the hoops world in choosing to leave OKC and Russell Westbrook behind to take his talents to Golden State.

While the Warriors are probably not going to be able to recreate last year’s record-breaking win total, they're well on their way to finishing atop the Western Conference standings. Dudes are currently four games ahead of the Spurs, with KD looking reclaim his MVP title from teammate Steph Curry.

However, Durant and the Dubs' hopes for the rest of the season took a major blow during Tuesday night’s game against the Wizards.

In the 112-108 loss, Durant hyperextended his left knee when teammate Zaza Pachulia fell backward towards him. Durant came up limping, but stayed in the game for two minutes before coming out for good.

The post-game MRI confirmed he'll be sidelined for at least four weeks.

It was enough for the Indiana Pacers to start believing in Chaos Theory.

Worse yet, there are those close to Durant who say the Warriors star could be out even longer.

To replace him, Golden State has reached out to the recently waived Matt Barnes. It’s not too much a stretch to say Barnes is far from the player KD is.

Hell, dude's far from the player that Harrison Barnes is.

The Warriors can only hope that Durant is back by the time the playoffs start in mid-April.

The West is loaded with teams like the Spurs, Rockets, and Jazz, and if they survive those challengers, the Warriors also have to worry about seeing the Cavs again in a potential Finals matchup. Only this time, the Dubs will have an old friend coming back to haunt them.