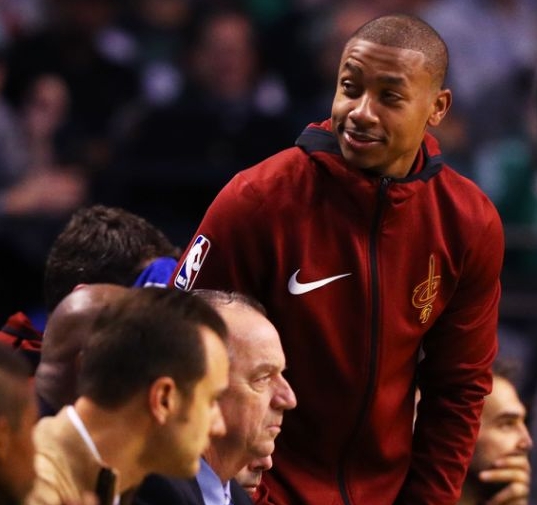 The last time this little dude hit the hardwood, he was wearing Celtics colors.

Isaiah Thomas did alright in them, too.

It's not often anyone gets mentioned in the same Boston breath as Larry Bird, but there he is:

Safe to say Thomas was extremely proud of being a Celtic and had truly bonded with the fans.

Then, from nowhere but the creative reaches of Danny Ainge's mind, he wasn't a Celtic anymore.

It goes without saying Thomas gave his all and more for Boston.

Frankly, the and more soon became an issue.

Only now is Thomas getting on the floor for Cleveland, but it's been a ginger re-entry.

But it's getting there.

Still, the Cavs' brain trust didn't think Thomas was ready to play in two straight games, so the plan was to hold him out.

Too bad that second game was in Boston.

At least, the emotions were more positive this time:

The night belonged to Boston, as they bounced the Cavaliers, 102-88.

So, the evening's highlight was the same for both teams, when Thomas made an appearance on Cleveland's bench:

Thomas had previously said he didn't want a tribute rolled out, since he wasn't playing. It woulda just been awkward.

Meanwhile, safe to say that even without Gordon Hayward, Boston's doing fine with the moves Ainge made:

Of course, this is merely a snapshot on the way to April.

Odds are strong Celtics fans will see lotsa Thomas in action sometime after then.