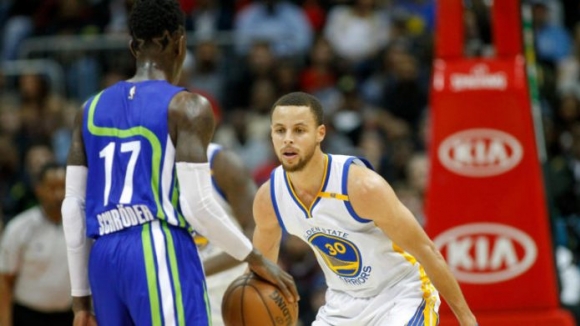 Maybe it’s something to do with American democracy.

Or possibly, it’s due to the grandness that is the American melting pot.

It could also be due to the fact that it’s really tiring to play on a team of one. Ask golfers.

Whatever the reason, team sports are damn near worshipped in the USA.

However, despite their popularity, team sports are far from perfect.

Whereas an individual game leaves nobody to blame but oneself, playing with teammates gives you a convenient scapegoat on which to blame your mistakes.

Case in point, this past Monday’s Hawks-Warriors game.

Early in the third quarter, Atlanta was up on league leading Golden State, 70-69. During a quick break in the action, Hawks teammates Dwight Howard and Dennis Schröder seemed to be getting into it over something. Whatever the argument was about, it distracted the duo from the Dubs inbounding the ball to a wide open Steph Curry.

As any NBA fan knows, there is nothing deadlier than a wide open Curry.

Atlanta coach Mike Budenholzer pulled Schröder from the game, even though the Hawks PG was leading the team with 23 points. Dude wouldn’t see the floor again, and ATL went on to lose the game, 119-111.

In the post-game, Budenholzer talked about the team needing to stay together, while Schröder seemed a bit confused why his coach pulled him for almost the entire second half.

Both Howard and Schröder played the confrontation off in the hours after, Dwight via his comments, and Dennis via Instagram. Plus, the two have a very similar sense of humor, which is always good for a long friendship.

While this blowup may have been a one-game thing, the Hawks have struggled of late.

Losing seven of their last ten, Atlanta risks falling further in the standings if they can’t solve their chemistry struggles.