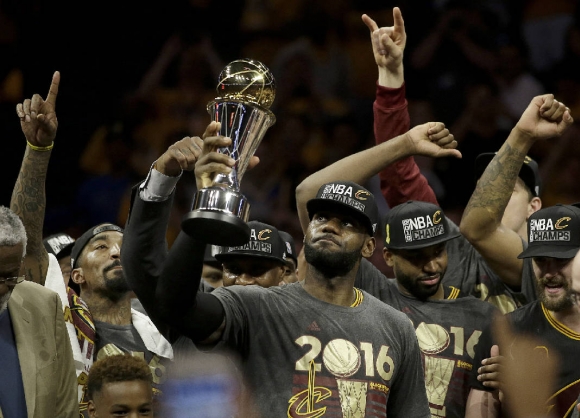 Those two words alone are enough to send chills down the spines of sports fans across the nation.

There is no tomorrow.

One game separates one team from sporting greatness and another from a long, disappointment-filled summer.

On one side, we had the Golden State Warriors; a team that made history this season with their 73 wins.

On the other, we had the Cleveland Cavaliers, a team looking to free their city from the list of most cursed sports towns in America.

The Finals between these two has been gut-wrenching. Well, at least, taken as a whole.

The individual games in the first six were pretty bad viewing. Sure, there were great player performances, but the scores featured nothing but blowouts.

After the Warriors' Game 4 victory in Cleveland, it was looking like the series itself was going to be a blowout. But the Cavs refused to go away quietly.

The team that LeBron built took care of business on the West Coast in Game 5, as Kyrie Irving joined in to put up dual 41-point performances on the Draymond-less Dubs.

The Cavs then followed up on their road win by winning Game 6 at home on the heels of another 41-point effort from LeBron.

This victory set in place the highest stakes Game 7 in NBA history.

48 minutes of hardcore hoops would reveal all.

Unlike the previous six, Game 7 was a nail-biter from the outset.

The Warriors were able to take a seven-point lead into the half, but the Cavs, yet again, refused to give up. They were like terriers on a postman's butt, engaging in back-and-forth lead changes.

The waning seconds found the score knotted at 89-89. Irving took charge for Cleveland and nailed a pressure-packed trey. Curry tried to respond in kind, but the D took away his rhythm, as it had done all night.

In their final offensive possession, LeBron hit a clutch free throw -- after possibly jamming his wrist -- to all but clinch it for his homestate team.

Fittingly, given the Cavalier defense, Golden State failed to even get a shot attempt off in the final six seconds, and Cleveland completed the first-ever 3-1 comeback in NBA Finals history.

To no one's surprise, James -- fresh from a triple-double line of 27 points, 11 rebounds and 11 assists -- was voted the MVP. Though he'd earned the award two times prior in Miami, it was evident to all that this one was special to the kid from Akron.

Besides LeBron and Irving, who posted 26 points of his own, the Cavs got good perfromances from Richard Jefferson, JR Smith, and even Kevin Love, who had the game's best plus/minus of 19.

The Warriors' best performance came from Draymond Green, who put up a near triple-double of his own with 32 points, 15 boards, and 9 assists. Had the Warriors been able to finish the job, Green could well have earned his own shiny MVP trophy.

Curry and Thompson came up 'way short in the pivotal game, as they scored 14 and 17 points, respectively. Plus the human brick machine known as Harrison Barnes didn’t help their cause with his 3-10 shooting mark.

Maybe an outside jumper system isn't the future, after all.

LeBron's been criticized constantly during his career. To be sure, dude's done his share of dumb and regrettable stuff over the past years.

But no one can deny he put his body on the line to get the job done here.

He may never reach MJ’s six-ring accomplishment, but he did something that everybody else thought was impossible.

Win a ring in Cleveland. After being 3-1 down.