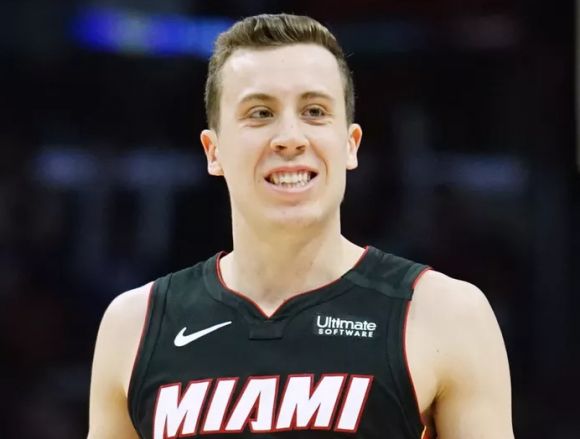 Dude so looks like he'd be right at home in Ward and June Cleaver's neighborhood, it'd be enough for Nick at Nite to consider bringing back Leave It to Beaver and green-screen him into the scenes.

Instead, Duncan Robinson's making a living cutting behind screens out in trey land, drilling shots at a pace that makes anything inside the arc obsolete.

As a matter of fact, to him, that area is obsolete.

Who'd have thought that'd be the case when he was just starting high school?

That worked out quite nicely. Williams College signed him, and dude wound up being that division's national freshman of the year, being vital on a club that made it to the D-III title game.

Of course there is.

Robinson wound up transferring to Michigan and played for another national title but didn't do enough to excite the scouts, going undrafted in 2018.

Was he surprised and/or disappointed?

Turns out Robinson was afflicted with imposter syndrome, which causes sufferers to downplay or dismiss their achievements. Dude worked hard at his craft but never really accepted the results.

However, a Heat scout did, especially Robinson's shot mechanics. His form was lethal from long range, which got him a contract and an assignment to their G-League affiliate in Sioux Falls. His offense was there, but the other end of the court was kinda alien to him.

Fortunately for him, the Heat figured they could clean that up due to his commitment to improve. Still, buying in wasn't his biggest break.

True. You gotta get there to be there.

And dude found himself playing for a coach who, if he didn't have imposter syndrome himself, could sympathize with it at the very least.

Eric Spoelstra began his NBA head coaching career by being perceived as filling a seat while LeBron James, Dwayne Wade, and Chris Bosh ran the show and Pat Riley was looking over his shoulder.

Not only did he see something special in Robinson's skills, he saw his need for support. Spoelstra told him to be more aggressive, and dude's stepped up all season as a surprising result, just like he did last night:

Robinson's proclivity from outside has made him a stat-geek's wet dream.

For example, only two players in NBA history with at least 245 trey-attempts have shot 45% overall. The other one's Steph Curry. With all due respect to Jimmy Butler, Miami’s offense posted a quality offensive rating of 113.8 when Robinson was on the court during the regular season. No current Heat player has had a more positive impact in that department.

No one's expecting it to change, either.

Robinson finally believes in himself and what he's doing. He'll likely make more converts as Miami sets the stage for what could well be a long bubble run.