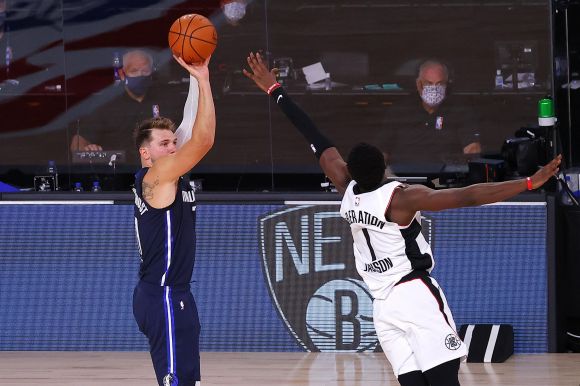 Well, this is one way to make up for an injured starter's lost productivity.

That's what worked for Luka Dončić in Game 4 of their first-round series with the Los Angeles Clippers.

Dude not only racked up 43 points, 15 boards, and 10 dimes on the evening, with his last basket being a mid-air money shot in the Dallas Mavericks' 135-133 overtime victory.

With Kristaps Porzingis on the shelf with a knee injury that looks to have longer consequences, Dončić went super-human, especially in the third quarter when the Mavs went on a 25-19 run to wipe out a 10-point deficit and replace it with an 8-point pad of their own.

Undaunted, the Clips came back in the fourth, and the game went back-&-forth from there. Lou Williams and Kawhi Leonard carried most of the o-load for Dallas, ultimately racking up 36 and 32 points, respectively.

The hell of it is, Dončić was a game-time decision because he had a cranky ankle himself, but this is the playoffs ...

At least Dallas did.

Dude's ankle was such that he remained on the bench to begin the final quarter as the trainers tried everything they could muster to shore it up short of calling 1-800-FAITH-HEALER.

Whatever they came up with, though, was good enough:

Through it all, throbbing ankle or now, dude kept answering the bell.

when the rubber met the road.

With the Clips leading by one and a mere 3.7 seconds remaining in overtime, Dončić took prime time performing into overdrive:

The reality is, without Portzingis, Dallas is in tough against the Clippers. Odds are they'd better savor this moment to the max, and Los Angeles had better raise their game if they expect to get much more time in the bubble.

Meanwhile, Dončić has joined some pretty damn exclusive company. He's only the third dude to notch at least 40 points, 15 rebounds and 10 assists in a playoff game.

The other two are Oscar Robertson and Charles Barkley.