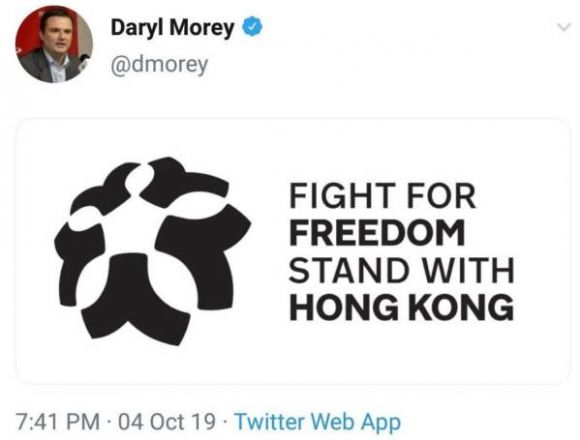 Sports and politics are frequently mixing these days, much to the chagrin of the masters of the universe in power.

Daryl Morey, in a moment of humanity that was ultimately misguided, spoke his mind online about the volatile state of affairs in Hong Kong.

The Houston Rockets' well-regarded GM came out in support of the pro-democracy movement that's currently taking place in a country still under the thumb of China.

General Manager Daryl Morey and Owner Tilman Fertitta feuding a little bit on the TL... Daryl Morey forced to delete a tweet about what's happening in Hong Kong at the moment, I would imagine a swift phone call came from ownership.

Personally, Morey can say whatever he wants. pic.twitter.com/NdeqI8NPL1

As you can see, this opinion was greeted with complete horror from many concerned interests, including the Rockets themselves.

Team owner Tilman Fertitta -- whose name we should definitely discuss at a later date -- quickly ordered the tweet to be deleted.

While Morey complied, brows had already been furrowed in the People's Republic of China, a regime that would just assume see this whole freedom craze fizzle out.

This is exactly what the latest South Park episode has told us. “You gotta lower your ideal of freedom, if you wanna suck on the warm tit of China” pic.twitter.com/lI3Vj0Qth7

Sadly, other Chinese interests are following their lead.

Even sadder still, Morey was forced to explain something that shouldn't require an explanation:

1/ I did not intend my tweet to cause any offense to Rockets fans and friends of mine in China. I was merely voicing one thought, based on one interpretation, of one complicated event. I have had a lot of opportunity since that tweet to hear and consider other perspectives.

2/ I have always appreciated the significant support our Chinese fans and sponsors have provided and I would hope that those who are upset will know that offending or misunderstanding them was not my intention. My tweets are my own and in no way represent the Rockets or the NBA.

The normally progressive NBA has also issued a statement:

This is all so very depressing:

This NBA-Hong Kong-China mess is fascinating. The NBA is super woke when it comes to things like made up US transgender bathroom disputes, but bent the knee to China when Daryl Morey came out in support of democracy & upset communists. Shows you how hypocritical the league is.

There have been reports indicating that Morey's job could be in jeopardy, which would really be an insult to our intelligence.