Can Someone Use Some Ice? 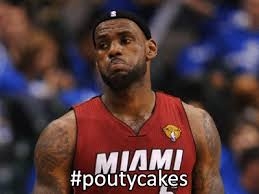 Game 1 of the Eastern Conference semi-finals between the Bulls and the Heat can be succintly summarized in one word:

After a nine-day lay off, Miami looked out of sync throughout the entire first half, but you can thank the Bulls stifling defense for that offensive inconsistency.

Honestly, what do you expect from a Tom Thibodea defense? Without two key starters (not including Derrick Rose), the Bulls took their adernaline rush from that Game 7 victory over the Nets and pounded the Heat inside and out. You think Lebron was disgusted after that 27-game winning streak was ended because of these Bulls during the regular season? Well, he's going to have to deal with brutal screens and intense defense from Taj Gibson and Joakim Noah for the remainder of this series.

Sounds like an abundance of ice baths are expected in Miami tonight. Expect an boom in Alève sales around the Miami metro area within the next few weeks. This series is going to be brutal.

Can Lebron & Co handle the physicality?

That's another reason why we're all going to watch.