Can Joerger Save the Kings? 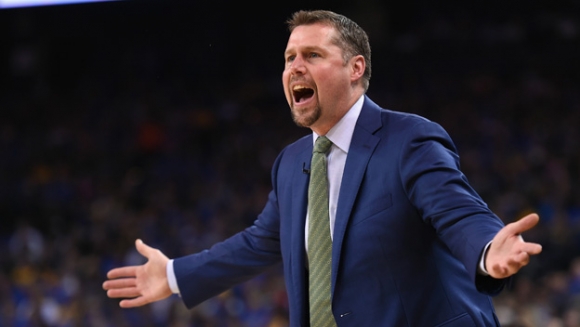 The Sacramento Kings haven't exactly been the most stable organization in the NBA.

However, dude's a mixed blessing, ie- he's a meddling micro-manager.

The past two seasons have seen the Kings fire two coaches as well replace their general manager with a dude who doesn’t know how the salary cap works.

Then there was the ongoing soap opera that gave Boogie Nights a sporting twist.

Star player DeMarcus Cousins was constantly under threat of being traded this past season, as he and former coach George Karl never saw eye to eye.

With Karl gone -- and not quietly -- the club was left to find the coach who'd finally make the name Sacramento Kings relevant again.

And they may have found that man in David Joerger.

Dude did a great job in Memphis this year, taking a scrapheap of a team to the playoffs. Ordinarily, a stellar coaching job like that would merit praise from his org; however, office politics intervened and aloha meant goodbye.

It probably had something to do with Joerger's decision to seek greener pastures the past two seasons. Awkward.

So the Kings sent a private jet to bring him to Sac-Town, toute suite.

Within a day, Joerger was on board with a 3 year, $12million deal, with a team option for a fourth year.

Anyone want to take the odds of his seeing that fourth year?

Great coaches have tried and failed before him, but who knows?

Maybe he'll still have a chair when the music stops. It could depend on whether the Kings will still have Cousins.