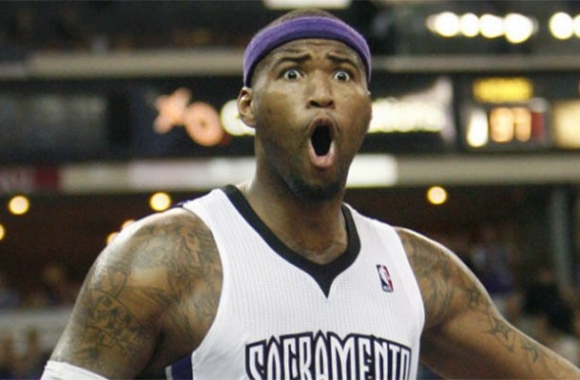 DeMarcus Boogie Cousins is the king of Sacramento.

The guy is basically the only reason to ever watch a Kings game.

Without him, the Kings are just another boring lottery team. So it would only make sense for the organization to make Boogie happy.

Sac-Town's paying public has become fond of seeing stuff like this:

Too bad Cousins is stuck on the Kings, who are basically the opposite of a model organization.

Sacramentio has basically tried its best to piss off their superstar by firing the coach he liked in favor of one whom he didn’t like, aka George Karl.

Karl and Cousins failed to build a relationship in the Cali capital. It’s not that Boogie's a bad teammate:

Whereas Karl likes a fast-paced offense, Boogie depends on posting up, which is a rarity for Karl-coached teams.

If Karl was smart, he'd re-work his game plan to ensure that Cousins remains the centerpiece of his offense, but Georgie-Boy doesn’t seem to enjoy Cousins’ company.

The word's out that Karl wants the Kings to ship Cousins out of town. Boogie, using the adage that a picture is worth a thousand words, tweeted what he thinks of Karl:

Ironically enough, this isn't the first time that a disgruntled Karl player used the phrase snake in the grass to describe his coach.

The divide between Cousins and Karl may be the best thing for Boogie. It might land him in LA, where he can help Kobe revive the Lakers, or possibly in Denver, where he'll be reunited with his old buddy, Michael Malone.

Of course, Karl and Cousins could always settle their differences with a good old-fashioned winner-take-all fight. But I can’t see that ending well for Karl, especially considering how Boogie was able to make a 7 foot, 255 pound Jonas Valančiūnas cower in fear with a simple look.