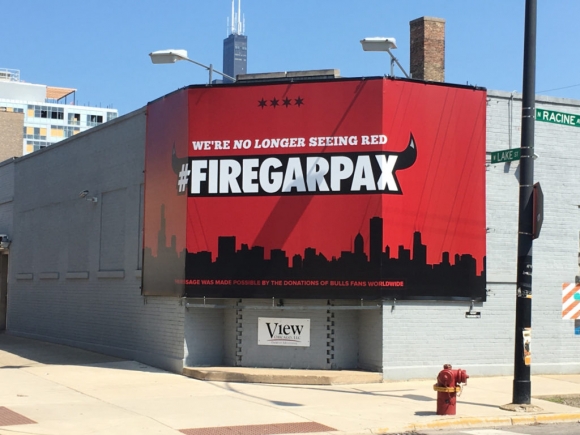 The Bulls front office has been a running joke both in Chicago and nationally for some time now.

Most recent moves made by the organization have been met with derision, with the dubious Jimmy Butler trade being no exception.

Fans in Chicago have been grumbling for a while, but they're now apparently becoming proactive.

A group of concerned Bulls enthusiasts managed to raise $8000 to channel their discontent into a lovely billboard.

Yes, the movement is upon us.

John Paxson and Gar Forman have clearly not endeared themselves to Bulls faithful in recent years.

After much indecision and mixed messages as to the future direction of the franchise, the Bulls finally do appear to be committing to a full rebuild.

However, this hasn't exactly appeased long suffering fans of the team.

Hopefully, this organized activity with the billboard was cathartic for these fans, because ownership typically doesn't make personnel decisions based on public opinion.

In this particular instance, though, perhaps they should.

Oh, along with the billboard, another enterprising Bulls fan pulled this little online caper:

Now, that is good stuff.