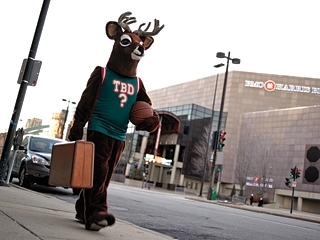 Far and away, the best facility in pro sports is AT&T Park in San Francisco.

Why? One main reason: It was privately financed.

No other money-spinning playground for the benefit of 1%ers can make that claim. And why would one want to? Nothing is better than reaping profits on the backs of other people's dosh.

But the San Francisco Giants' ownership sees this differently, at least in regards to major construction outlays. And they did it right:

Now, the Milwaukee Bucks' powers-that-be -- backed by NBA brass -- have convinced city leaders there that it's their turn to build a new arena, and they're getting down to crunch time. Here's what the scenario looked like in the spring of 2013:

More than the location, of course, is the matter of paying for it. Government dosh is gonna be tough to commandeer. The new owners -- kajillionaire Wall Street types -- have upped their contribution to $150million -- and what a great time to expand the equity investors! -- but they're still $200million soft.

It's also gonna be tough to break out the old bromide that the community will take a financial hit if the Bucks leave. Seattle's Key Arena -- ironically, the probable temporary location if the Bucks move -- is making more money than it ever did while the SuperSonics were there.

So that NBA buyout clause in the purchase contract is starting to loom large:

In other words, hellooo Seattle.

Adam Silver was one of the authors of that clause, but in November, he did his bit for local PR:

Even with totally private financing, most cities would toss in amenities and tax breaks. That's what San Francisco did. And everyone is happy there.

After all, the owners are pocketing 100% of the net profits, not to mention also benefiting from legally creative operating expenses. So if these dudes are truly committed, it's time to show a conscience and step up.