Boston Makes Its First Move, and It's Not Rondo

Published on 3-Jul-2014 by Bridgett Davis 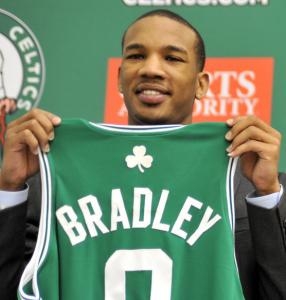 The Boston Celtics are hoping for a rub of the green.
They've begun their journey of what they hope will be flush in good fortune by signing Avery Bradley to a four-year, $32million deal.
The big question is whether or not this is a good move. Bradley is coming off his best season ever. He's improved his offensive production, averaging 14.9 points, and is shooting 39.5% from behind the arc. He's one of the few positives that's come as a result of Rajon Rondo's injury. Bradley, known for his untiring defense, has also improved to 3.8 rebounds a game.
What about Bradley's obvious black cloud?
It’s impossible to ignore the elephant in the room better known as his health, or lack thereof.  At the young age of 23, Bradley has already undergone numerous shoulder surgeries and endured a various array of ankle injuries.
Is Bradley damaged goods, making this deal a monetary gamble? Time will only tell, but for an organization still paying for an underachieving Jeff Green, the Celts should be treading lightly.
All of this points a clear picture of where Boston is going in the future. Marcus Smart will be Boston’s new point guard.
Rajon Rondo? Not gonna happen.
We all know that Rondo is an elite player, and in return for his labor, he wants what every other player wants. A max contract. In his case, that' upwards of 100 million smackaroonies. And that’s not gonna work with the ink dry on Bradley's deal.
Bradley’s re-signing is the first move of many in the Celts' reshaped future. It wasn't a prodigious start, which will probably be reflected in their finish over the next few seasons.
DAILY UPDATE