Booker Scoring on Crowder On and Off Court 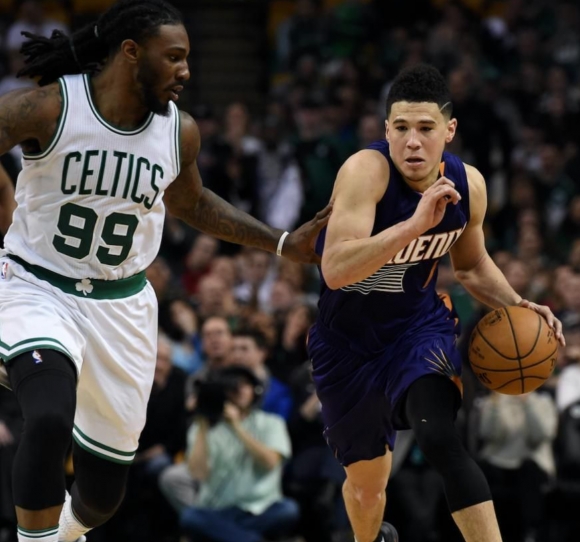 If your team wants to bring home a ring, they’re going to need to box out, swipe passes, and pull down those boards.

However, good defense is nowhere near as fun or exciting to watch as a dude dropping mad buckets.

The Suns are a bad Lakers team away from being in the Western Conference basement. With seasons’ end only a couple weeks away, they have nothing to play for, other than tanking for dudes like Markelle Fultz and Lonzo Ball.

Despite what you might think, this doesn’t mean Suns games aren’t worth watching. They sport a roster full of young and talented players who have the ability to make weekly highlight lists.

This week was no exception, as Booker put on a show against the Celtics in TD Garden:

Dude dropped an astonishing 70 points on a championship-hopeful Celtics squad, hitting 21 of 40 shots as well as four treys and 24 free throws.

While his squad never really stood a chance at coming back, Booker posted 28 of his 70 in the fourth quarter.

With his accomplishment, Booker joins an elite list of only five others who've scored 70 or more in a game. Invoking the most famous of them -- Wilt Chamberlain -- he took a picture with a sheet of paper displaying his night's work:

The Celtics' Jae Crowder -- who was a tad mad he let a dude on a terrible team make NBA scornig history on him -- posted his two cents on Instagram, commenting that he'd “never seen so many guys happy after an "L".

From Crowder’s perspective, it’s understandable to value a win over one dude scoring buckets.

Fresh off dishing on Crowder on the court, Booker was able to toss a few more grenades with his own response. Booker’s simple “You can’t guard me” was enough to get Crowder to back down.

Dude’s comment is the perfect social media own. It’s short, simple, and spits some super-hot fire.

It’s true that Crowder’s Celtics took home the W, but it was Booker that handed out some L’s Friday night.