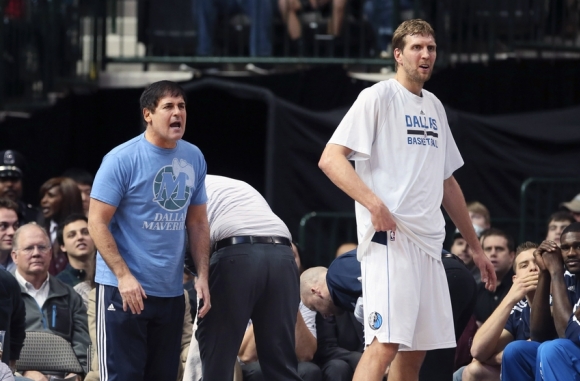 For good or ill, Dallas Mavericks owner Mark Cuban wields quite a bit of influence.

The disgustingly wealthy entrepreneur will sound off on pretty much any subject from politics to NBA officiating and can be rather entertaining, depending on what side you fall regarding the issue at hand.

Recently, though, the full scope of his influence and heavy-handedness was revealed.

Those silly gooses at Bleacher Report had the nerve to post a completely benign tweet about Dirk Nowitzki tossing up an airball from three-point land, footage included.

For posterity, here's the airball in question:

All of this sent Cuban into a tizzy, and he quickly took to social media with his concerns, posting a series of email exchanges between himself, Turner president David Levy, and a third party who's apparently NBA commissioner Adam Silver.

Essentially, Cuban considered this tweet to be inflammatory and demanded it be taken down.

He even threatened some sort of vague retribution.

Yes, Bleacher Report did in fact delete the tweet, responding with this sad reply:

Apparently, Bleacher Report doesn't realize that Nowitzki can be gently mocked and still be an NBA legend.

Also, they appear to be missing a backbone.

You may have just set an extremely dangerous precedent.