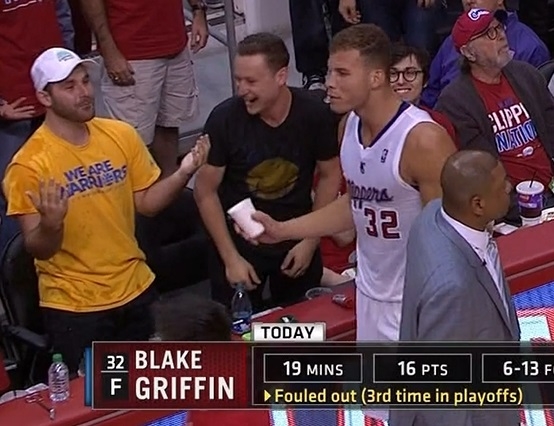 The NBA playoffs are upon us, and with them the prerequisite excitement and drama.

But for Los Angeles Clippers star forward Blake Griffin, there is only frustration at the moment.

Griffin experienced a rough night in the Clips’ 109-105 home-court loss to the Golden State Warriors in the post-season's first round. The four-time All-Star somehow managed to play only 19 minutes before fouling out with under a minute left in the game.

In the immediate aftermath of picking up his sixth foul on a somewhat questionable call, Griffin was incredulous. This sensation only increased after viewing the replay on the sideline.

He just so happened to be holding a cup of water while watching the replay, and as he threw up his arms in exasperation, the water splashed an enthusiastic Warriors fan behind him.

Of course, the Internet being a perfectly conceived vessel for idle speculation, Griffin’s motives were immediately questioned, with everyone wondering aloud whether or not this malicious act was done intentionally.

Here are a few reactions, starting with Griffin:

"Well I heard him say something, but I didn't know exactly what I did. [The glass] wasn't full, though. So I took my mouthpiece out and I picked up the cup. But if I did I apologize ... Water, you know."

Here is Will Meldman, young Warriors fan and lucky recipient of the NBA backwash:

And finally we have Justin Wolf, friend of Meldman:

"I thought it was intentional. He tends to do a little [expletive] during games, and he might have been pissed off on what [Warriors guard] Klay [Thompson] said."

Wolf may have thought it was done on purpose, but he enjoyed ridiculing his friend nonetheless.

Obviously, we don’t really know if Griffin consciously dumped water on Meldman, regardless of what the fan may have been saying at the time. However, any definitive conclusion would have deprived us of so much trivial fun.

Back on the court, Griffin will look to remain in the game for more than 19 minutes as the Clippers try and even the series at one apiece.

Meanwhile, I'm sure Meldman will enjoy the discarded cup and Clippers-provided towel he received, presumably as compensation for the emotional trauma suffered because of this most unfortunate incident.