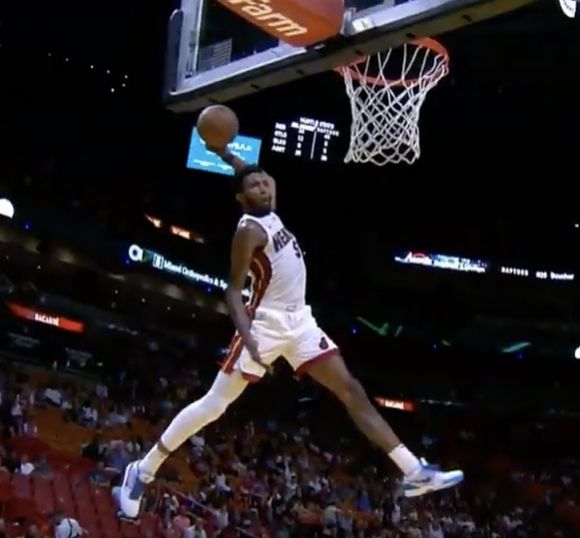 In the process, those rollicking Raptors tied a team record by twining 21 treys in one game.

Wonderful. Who's gonna remember all that when the Heat were just roadkill on TO's road to the playoffs?

Exactly. Everyone's gonna know this game was even played because of this:

How high up did Derrick Jones Jr launch himself?

Dude just merged a throwdown with a dunk, which we now know can only occur from the ozone layer.

What makes this an act of shock and awe is he did it in a real game and not the circus act the All-Star Weekend's dunk contest has become.

When dude's being defended and James Dolan decides to park anywhere he bloody pleases during the course of a real game, that will be impressive.

And of course, that bitta coolness didn't come outta nowhere.

Here's Jones deploying his dunkability a year ago:

Clearly, Jones made the most of his time in the G-League:

Dude's playin' from the mezzanine, and it's spectacular.

He's got an impressive catalog of dunks, but the throwdunk is his signature shining moment.