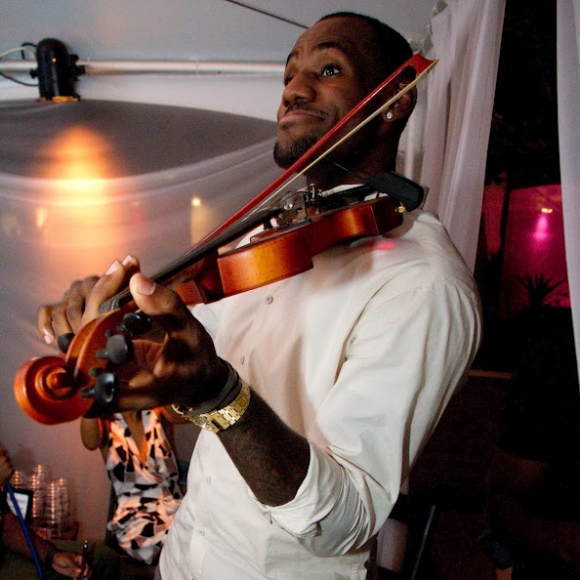 Part I of this article can be found in the NBA Daily Opinion section.
4. Oklahoma City Thunder

As mentioned earlier, a healthy OKC represents the best chance to challenge the Heat, but we won't get to see that until next year. They still make Number 4 on this list, however, because I want to see what Durant can do as the lone star on the team. We know he is just an absolutely incredible scorer who for some reason seems to want to defer at times. If he can take a Carmelo-like approach and get himself 30 shots a game, can he average 45 points a game efficiently?

If he can, then OKC is in business and they would have a decent chance to make the NBA finals ... however, they wouldn't have a decent chance to win it. The Thunder couldn't win last year with Russel Westbrook and James Harden, so they aren't going to win it without them. Although, it should be noted that James Harden spent the majority of last year's finals peeing his pants. I give OKC a 10% chance to beat the Heat.

The Spurs would be higher on this list if they were healthy, which is becoming a theme of this article. Manu Ginobili has been limited in his minutes due to hamstring issues and the Spurs are going to miss the trio of Tiago Splitter, Boris Diaw and Boris Diaw's boobs. Splitter could be back as early as a week, but Diaw is likely out for three more weeks due to back surgery he had earlier in April. The Spurs have the league's best coach in Gregg Popovich, and also the league's most intimidating person to interview in Gregg Popovich. The Spurs play basketball how it was meant to be played, with their impressive passing, ball rotation and defense. They find the open man, no matter who he is, and he usually scores. However, even though Popovich could coach circles around Erik Spolstra, the Spurs simply lack the defense this year, especially at the 3-spot, covering LeBron James. They cut their best LeBron defender in Captain Jack a few weeks before the playoffs. I give the Spurs a 20% chance to beat the Heat.

The matchup against the Knicks starts to get into 'it could happen' range. It's still not likely, and a lot would have to happen, but it is at least feasible. The Knicks took the season series, 3-1, in large part due to their three point shooting. In the three wins, the Knicks went a combined 51-107 from three for a tidy 48%, whereas in the loss they shot 8-29, or 28%. And that right there is the key to the Knicks victory against Miami.

If the Knicks can shoot the lights out from three, something they are capable of doing, then it could be an interesting series. Carmelo is playing well right now, averaging 33 points and getting to the line 9.3 times a game in these playoffs. But he's going to have to shoot a better percentage than his current 41%. Defensively, Tyson Chandler's rim protection was one of the most important keys to victory for the Mavericks in the Finals two years ago. If Carmelo-JR Smith can match LeBron-Wade in scoring, then it's all up to Jason Kidd, Raymond Felton, Iman Shumpert, and Steve Novak to outshoot Shane Battier, Mario Chalmers, Ray Allen and Mike Miller.

Exactly ... the prospects aren't good, and I didn't even mention Chris Bosh. I give the Knicks a 25% chance to beat the Heat.

In a cruel twist of fate, the team that has the best chance to knock off the Miami Heat has maybe the worst chance to advance far enough to play them. But Miami fans should be afraid of the Griz. Memphis is 3-2 against the Heat since LeBron took his talents to South Beach. In those games, Miami only managed to score over 100 once, and in two games, the Grizzlies won by at least 15.

As I said earlier, the Heat struggle against teams that play good defense, don't turn the ball over, and can score out of the low post. Miami famously plays small-ball, often times putting Shane Batteir at the 4 position; that means he's guarding Zach Randolph on the defensive end. Much kudos are deserved for Battier's ablility to gut it out on the defensive end against opponents that are frequently larger and stronger than he is, but Z-Bo is a completely different animal to deal with.

With defensive stopper Tony Allen and veteran defender Tayshaun Prince, as well as Mike Connely Jr -- who quietly had a very good year -- the Grizzlies have the perimeter defense to slow down Miami. On the inside, they have defensive player of the year Marc Gasol and the aforementioned Z-Bo, who is an absolute bruiser on both ends of the court. As far as post-scoring, Randolph and Gasol averaged a combined 29.5 points and 19 rebounds a game on the season. Their ability to grab rebounds against a small ball lineup is key. If nothing else, Memphis's focus on interior scoring slows the game down. Long shots create long rebounds and long rebounds create fast breaks. That's where Miami lives. They thrive on the fast break.

With all that being said, Memphis could easily lose their current series to the Clippers, and even if they win, their road is far from clear. However, if Memphis did make it to the title game, I'd still only give them a 35% chance to beat the Heat.

Looks like we'll just have to wait another year for someone to challenge the King for his crown.