Barkley: Lebron Not in My Top Five 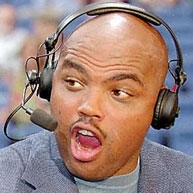 Who are your top five NBA players of all time?

That was a question posed to Charles Barkley in a Sports Illustrated article, and of course, Barkley of course didn't disappoint.

Obviously, it's a fool's errand to try to compare players from different eras. But since someone asked, here's Barkley's list:

Barkley expounded on his choices:

"Those second five fluctuate, but who do I take off my Top Five? LeBron can get to No 6 on my list, but here's the thing that bothers me about the whole LeBron debate: I want to know why y'all killed Kobe Bryant! Y'all don't even compare him to LeBron anymore. You are skipping him for LeBron and going right to Michael. I'm still going to take five [titles] over two. It makes me laugh with my friends -- the media just kills Kobe Bryant. Like he's dead! Five still is a lot more than two!"

Barkley does make a good point. Why does the media have a tendency to skip Kobe Bryant for Lebron when, as Barkley has reasoned, Bryant has won almost as many titles as Jordan?

Still, if rings are a key criteria, why isn't Bill Russell at the top of the list? He has 11 of them, and his dominance of a game was a major reason why. And if you want to talk about a player who made his teammates better, no one in NBA history compares to him. No one.

I also have to question Sir Charles about two glaring omissions from his Top 10. Where are Magic and Bird?

How can you not have the two players who basically brought the NBA back to life on your all-time list?

Come on, Sir Charles! Who meant more to the game at the time than Magic and Bird? To me, that's a bigger shock than Lebron not being in the Top Five.

And knowing the personalities of Magic and  Bird, they won't let Barkley forget him snubbing them, either.