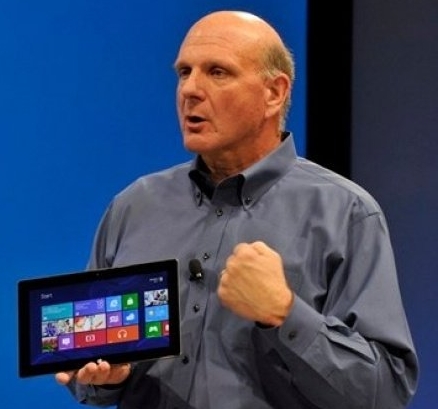 New Los Angeles Clippers owner Steve Ballmer is off to a rollicking start as an NBA poobah.

The man has a vision. And visions have to start somewhere.

After all this time, Ballmer is finally getting his revenge on Apple, one Clipper employee at a time. He's told the entire workforce, from front office to benchwarmers, iPads are out. Surface is in.

It's the sort of vision only an optometrist could love.

Ballmer may have bought his way into a new line of business, but he's still remembered as the tech sector's version of James Dolan. And with the bar set that low, he's got a shot at ... well ...

Actually, Satya Nadella has done well in the short term, righting the good ship Microsoft with at least one product. All he has to do with it now is overcome its reputation from when Ballmer was running the show. He's getting there:

It just needs to overcome a nagging little problem:

If any of those devices wind up with the Clippers, it can accurately be said that their new owner will be responsible for giving his players the hot hand.