Ballmer Trained Himself for NBA Ownership 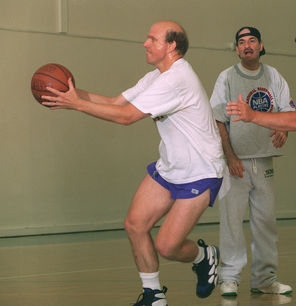 Who knew that as early as 2008, übergeek Steve Ballmer was preparing to be the anti-Sterling?

The Seattle Times published a report detailing how the new Los Angeles Clippers owner was one of those parents at the exclusive Lakeside High School in Seattle, a private institution renowned for accelerated learning whose alumni include a couple of nerds named Gates and Allen.

Coincidentally, the tech world is virtually unanimous in its belief that Ballmer damn near destroyed Microsoft during his time at its helm.

It seems Ballmer didn't cherish chess as much as hoops while his kids attended Lakeside. That's probably fortunate for the chessers; getting sprayed with the spit of enthusiasm can disrupt one's concentration. And they were winners, as opposed to the schools hoopsters. But, as noted in the Times piece, Ballmer had a plan.

Side note: Who knew that scene from Airplane! was a tutorial for over-ambitious billionaire parents?

His PR detail earns its keep, too. Ballmer was 'way out in front of the Times' revelations by making certain a Times of another kind knew the happy, shiny part of his plan. Nice try.

So, dude's got dosh and doesn't mind going into the gray areas to gain a competitive advantage. He'll fit into the NBA's poobah patrol quite nicely.