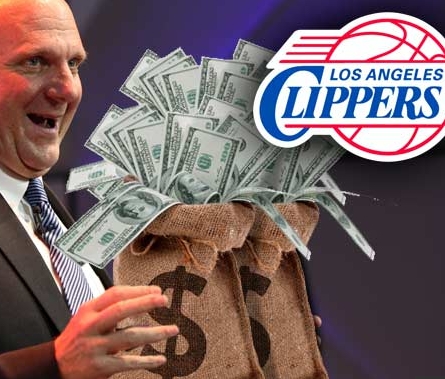 A litany of economic principles and business analysis fundmentals can still be trumped by one obviosity.

The price of an item is determined by what someone is willing to pay for it.

In the case of former Microsoft CEO Steve Ballmer, for whatever reason, he figured 10% of his $20billion fortune was a fair price for the Los Angeles Clippers.

Maybe he already missed the limelight of being a tech-geek Master of the Universe. Perhaps he had a void in his life after being forced out of Gatesneyland. Perhaps he wanted a public reason for getting the hell out of Seattle after his dethroning.

He could simply regret having been born to late to appear on the Gong Show.

And it's possible Ballmer just had more money than sense.

However, there's no question his purchase price radically shifted the landscape of NBA expansion.

The consensus among economists appears to be that Ballmer's over-the-top purchase price is an outlier, that it won't raise the collective values of other NBA clubs because of the circumstances involved, what with LA being LA and  the like. They could be right. There's often quite a difference between price and value. Ballmer's purchase only makes book the longer he holds onto the team.

Perception these days is that 32 is a tidy number of North American pro sports leagues, what with all conferences and divisions being able to have an equal distribution of teams. And yet, only the NFL has gone there. Owners in other leagues hide behind the argument of diluting their talent pools, but while that may or may not be a legitimate contention, the reality is they're wary of having to split their revenues into smaller shares.

A bigger up-front windfall softens that position. Timing-wise, NBA owners know that windfalls won't get much bigger than when a franchise goes for twice what the optimists expected and almost four times what the last sale netted. How quickly did perception of the Bucks' deal turn from frivolous to shrewd? That one won't be fodder for killing air time like this anymore:

Seattle took a hit when wishful suitor Chris Hansen lost Ballmer. He may need to look farther than the current old-money crowd in that city -- names like Nordström, who are allegedly still in place -- but old money is more interested in value than price.

Hansen must be searching feverishly right now. Candidates with modern arenas are more of a threat to him now. Yes, Seattle is the USA's 12-largest market, but Los Angeles is the second, and the NFL has done quite well without it. Plus, the proliferation of digital media is gradually overshadowing market size as a factor.

If the current murmurings among NBA owners becomes a collective roar, Commissioner Adam Silver will reverse his no-expansion stance sooner rather than later. Hansen and his competitors had best get on their marks.