Are the Atlanta Hawks Worthy of Being Feared? 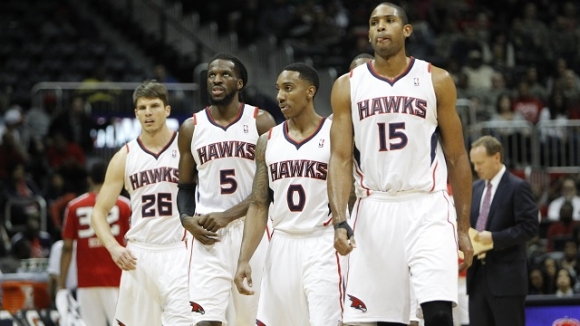 Are the Atlanta Hawks as good as people think?

After the Cleveland Cavaliers put the hurt on them in Game 1 of the Eastern Conference finals, questions such as these are going to become the talk of sports fans everywhere.

It's no secret the Hawks have excellent team chemistry and a fluid offense while being one of the surprises in the NBA.

Head coach Mike Budenholzer has certainly inserted the Spurs mojo into this team.

Here are a couple of examples:

The Hawks had a fantastic regular season that saw them produce 60 wins. That’s right, the Hawks had 60 wins.

Also, they secured the No 1 seed in the East, which is always a good thing. But, there was something off about them.

Even as the wins kept piling up and the domination became almost comical, the Hawks seemed to be the definition of a regular-season giant and a post-season dwarf.

However, Atlanta did have some mind-boggling sequences such as this:

Going from a consistent first-round exit, to being one of the favorites to go the finals is a big leap mentally, and the Hawks -- regardless of their great record against Western Conference teams -- never seemed to be a confident pick.

Looking at the ATL's post-season run so far, it hasn't exactly been convincing:

Post-season experience is everything, and the Hawks don't have a lot of it outside of a couple of players.

Speaking of experience, this crew is finally facing an opponent that can match their skill level and intensity while having a star with loads of post-season experience.

What happened in Game 1?  The Cleveland Cavaliers busted through that 'invincible' aura and rode a JR Smith heat check of the century:

It turns out this LeBron James dude is pretty hard to guard, especially when DeMarre Carroll is your best defensive player to put on him and Korver just doesn't want to get steamrolled. Can you blame him?

It does hurt that the Hawks don't have Thabo Sefolosha’s services, which could've made the defensive assignments much easier and given LeBron different looks.

But, this is the NBA; stuff like that occurs. They're lucky that Carroll’s injury, which looked devastating when it happened in Game 1, is not too serious and is just a day-to-day procedure of getting him back.

Unfortunately, the Hawks may not have days if the Cavs just figure them out.

Considering Carroll was becoming their best player at times this post-season, any game he misses feels like a gut punch.

Simply put, Atlanta has met its match, and while this team certainly has talent and 60 wins is nothing to sneeze at, they're finally facing an opponent that can break down their schemes and not let their offense breathe.

Game 1 went to Cleveland. Can the Hawks respond and show that their record and philosophies carry over against opponents of this caliber?

Because that's the way the dimension of time works, we shall see.