Angry White Dude: Why Do They Do That? 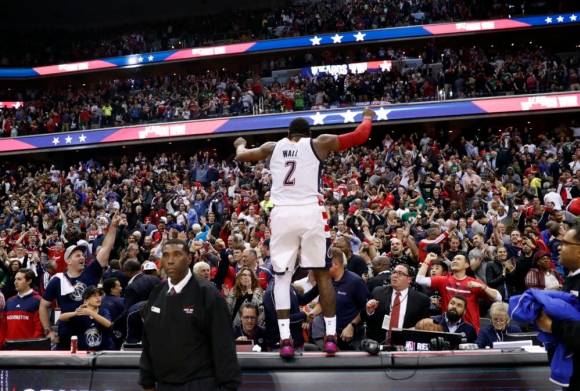 So last Friday, John Wall hit a 3-point shot as the clock was running down to give the Wizards a 1-point lead in Game 6 of the Eastern Conference semi-finals.

Never mind the fact that he was a reason they were trailing in the first place, going:

The clock should've been stopped earlier automatically on the whistle or by the neutral clock operator.

Never mind that one of the brightest young coaches in the NBA drew up a play at the end of the game that consisted of:

That's the best play you could come up with? Down one, and you call for a shot from where most of us would've had to call FedEx for next-day delivery?

The main thing for Washington was the fact that the shot was missed.

What happened next is what's annoying to me and maybe many of you.

John Wall jumped up on the scorers table and proceeded to act like he'd just won an NBA Championship, pounding his chest like Tarzan, tugging at his jersey, and flexing his rather small bicep.

Why? What for? Why do they do that? What had he really done?

Dude simply hit a shot that sends the Wiz on to Game 7 tonight in the Boston Garden.

Washington is nine wins away from an NBA title. Nine!

Wall is certainly one of the top point guards in the league, but if you want have a party and get all the attention, you need nine more wins.

After win No 9 is when you should celebrate, not after winning Game 6 of the semi-finals on your home court while shooting 9-25 and having a little bit of help from the clock operator!

Act like you been there before, even if you've not!

Why do they do that?