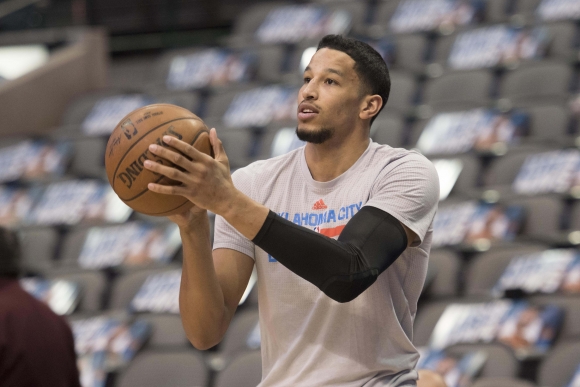 As embarrassing as it is to admit, I listen to sports talk radio.

To say it stinks does not even begin to express how I really feel about it, but that's another article for another day.

Recently, on one of the shows -- maybe more -- they were talking about changing the rules for the Hack-a-Bricklayer situations that occur on what seems like a regular basis in the NBA.

Seems like on Sunday, the Thunder had a good shot at beating the Rockets.

There was just one huge problem: André Roberson can't hit a foul shot!

This dude makes kajillions ,and he can't hit a free throw! I kid you not. 42% from the line for the season.

With the game on the line, the Rockets just kept fouling Robertson; down the stretch, he missed 6 out of 8 and Houston went on to win, 113-109.

I guess for some, it was difficult to watch, but not as difficult has it was for Robertson to make a damn free throw.

It gets even worse.

Radio knotheads want to change the rules for those times when a player gets fouled away from the ball. They actually want to reward a team for having a player who can't shoot!

It's almost enough to make an Angry White Dude go off on an X-rated rant!

On second thought, this is a great idea.

Let's change a bunch of the rules.

Radio knotheads, you're amazing! Let's reward players for not working on their games and not being very good at things that all of us expect a professional basketball player to be good at.

I'm sure the great readers here at The Daily Player can come up with more rule changes!!

Radio knotheads, do I have to sic John McEnroe on you?

You dudes are about as good at your job as Roberson is at shooting foul shots.