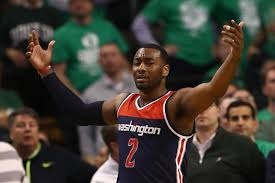 It seems that your resident Squire of Ire sure does know a thing or two about certain things.

My column on Mon 15 May informed everyone about John Wall's over-the-top antics after his team picked up a win in Game 6 of the Eastern Conference Semi Finals.

Dude was on the scorer's table, flexing, screaming, and partying like it was 1999, baby!

Poor John forgot a couple of things during his premature celebration:

Wall partied so hard, he just didn't have enough time to recover for Game 7.

In the biggest game of his career, dude was practically a no show. Somehow, he shot even worse in Game 7 than he did in Game 6.

Boston picks up the Game 7 win at home in the Garden and now advances to face the Cleveland Cavaliers.

I really like the way the Celtics embraced their Game 7 triumph. They shook hands with the Washington players and staff and then left the court.

They get it. This was an essential win, and now, they get to keep playing.

Winning a semi-final series is not a thing for pros to celebrate. Their work is not done, and the Celtics at least act like they know it.

Remember, someone's got eight more wins until an NBA title. Then party on!

John Wall chose to party after a Game 6 victory. In Game 7 -- when his team needed him the most -- he was all partied out and couldn't produce.

He'll have a nice long time to rest up.

You've got an off-season to reflect, Mr Wall. Hopefully, you'll get one more player to help you out next year, and hopefully, you've learned the proper time and place to celebrate.