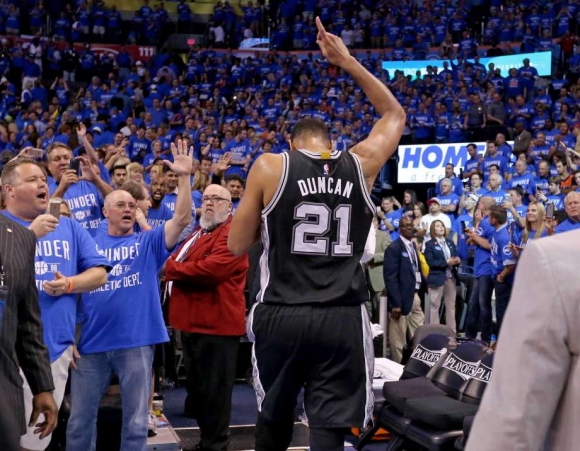 Tim Duncan announced his retirement from the NBA this week.

I believe it was 19 seasons of nothing but class.

No arrest record.  No farewell tour.  No one last contract that would cripple his team for years to come. No press conference.  No glitz, glamor or fanfare.

There was a press release. Yep, that was all. Amazing, right?

In this day and age of Look at Me! Look at Me! athletes, it was always refreshing to watch Duncan play and hear him speak.  Team first. Whatever it takes to win!

The former Demon Deacon was certainly one of the best players in the game's history of basketball. Perhaps the best power forward of all time. He was a two-time league MVP, and he led the San Antonio Spurs to five NBA Championships.

In fact, Duncan was one of only two players to win championships in three different decades.

Now, I'll miss Mr Duncan arguing every foul called against him. I dont think he believed that he ever fouled anyone during his entire career! (News flash: He did.)

What will also be missed is that sweet shot banked right off the glass. Players don't do that nowadays. It must not be cool to shoot a bank shot in 2016.

Save your energy, all you Look at Me! athletes out there today.

I dont pay attention you.  As a matter, of fact I dont even see you. I'm 'way to busy looking for the next Tim Duncan.

Sad to say, it might be a long wait to find a man with such class.

Thank you, Mr Duncan. The way you conducted yourself did not go unnoticed by many of us!  Enjoy your retirement.  You earned it!