An Awkward Reunion in Denver 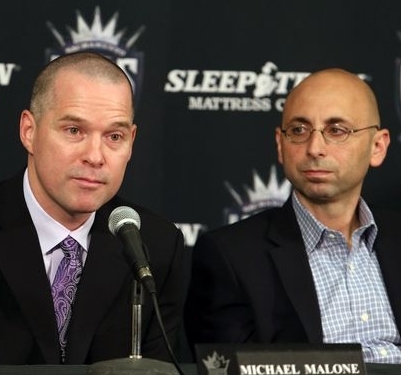 The Denver Nuggets' coaching search is finally over.

The Nuggies were dysfunctional at best last season. Former coach Brian Shaw never saw eye-to-eye with his players, which in this league, is the kiss of death for all but big-brand coaches.

Be it his feud with then-Nuggets point guard André Miller or his inability to relate to millennials, Shaw was unable to gain control of the locker room. The team’s problems came to a head when the players broke a game huddle to the chant of 1-2-3, six weeks, which was the amount of time left in the season.

Malone will be tasked with repairing relationships within the Denver organization. However, his greatest challenge may be repairing a relationship from his Sacramento days.

Malone will have to get along with new Nugs Veep of Business and Team Operations Pete D'Alessandro, aka the former Kings GM, aka the guy who fired Malone in Sacramento.

Malone’s canning in Sac-Town was rather controversial, as the team was on a pace to vastly improve over its previous season’s campaign until DeMarcus Cousins went down with an injury. The Kings gave the vanilla failed to live up to expectations reason for firing Malone; however, the boot was more likely due to Malone’s resistance to management’s desired style of play, which included a 4-on-5 form of defense, allowing for one player to cherry pick baskets.

D’Alessandro’s departure from Sacramento was due to the hiring of former King Vlade Divac as the team’s VP of Basketball and Franchise Operations.

Damn! This club has some long-ass job titles. As if they were IBM or a Pentagon sector.

Anyway, reports began to surface that Divac’s power within the organization had surpassed that of D’Alessandro, which was a sign for Pete to look for other jobs. Dude decided to jump ship and head to the Nuggets, for whom he'd previously been a VP of Basketball Operations under Masai Ujiri.

Earlier this month, Adrian Wojnarowski reported that D'Alessandro's hiring would not impact the team's interest in Malone, as it was Kings owner Vivek Ranadive who pushed for his ouster. D’Alessandro, not wanting to be next on the kibosh list, had no choice but to do the deed.

The two won't be working as closely as they did back in Sac, but they'ill definitely be passing by each other at the office.

Maybe Malone and D’Alessandro can bond over a disdain for Ranadive, who seems to only like having yes-men around.