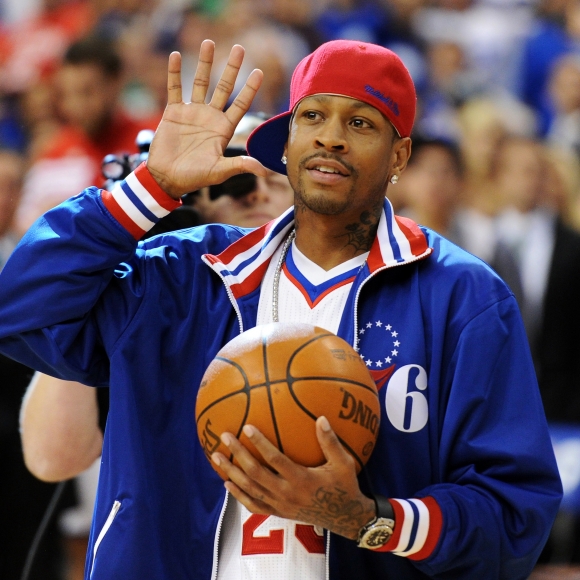 His unmatched skillset earned him the nickname The Answer.

Justifiably so, as he was the solution for virtually any in-game situation.

Check out the top end of his résumé:

However, as much as Iverson was The Answer on the court, he's proven to be a huge question off it.

Dude’s issues with alcohol and gambling, as well as his struggles with personal finance, have been widely reported in his post-playing days.

Despite this, he's still a prominent figure in basketball. Besides having his number retired last year, Iverson was among those invited to attend the 76ers' new uniform unveiling ceremony:

While there, Iverson was asked his opinion as to whether the Sixers should offer him a position within the organization. That idea was the brainchild of his former Philadelphia coach Larry Brown, who's reportedly been lobbying the team to offer him a job as assistant general manager.

Of course, Iverson loved the idea, believing he'd be a great candidate for the job as their resident basketball genius.

In that same interview, though, Mr Answer admitted to not having a great eye for physical talent as well as admitting that he doesn’t watch college basketball, which are fairly important traits and tasks for an aspiring front office candidate.

However, as a basketball genius, Iverson has the innate ability to determine whether or not a player is “going to be in the foxhole with you.”

This could be invaluable if Islamic State winds up on the schedule.

Frankly, though, I think there's a better chance of self-proclaimed super-genius Wile E Coyote getting the job over Allen Iverson.

Basketball genius or not, it does not overshadow the fact that Iverson's both unreliable and untrustworthy.

Even a club as downtrodden as the Sixers can't run the risk of enduring any number of potential scandals that he might cause.

That being said, Philadelphia will be smart enough to keep Iverson around to placate the fans just in case the team goes through another tanking rebuilding year.