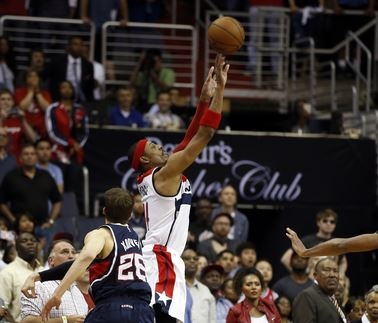 Since moving to Atlanta from St Louis in 1968, the Hawks haven't had much success in the postseason. Even the great, Dominique Wilkins couldn't manage to squeak his team into this type of opportunistic position.

The Hawks made franchise history by defeating the Washington Wizards, 94-91, on the road Friday night.

Paul Pierce's game-tying three was beautifully executed but just a split-second too late.

He couldn't recreate the magic that gave the Wizards a 2-1 series advantage in Game 3. Instead, The Truth -- who's been rather bold throughout this series -- will be calling his travel agent early. HIs trip to the Eastern Conference finals was just canceled, and unlike another hero from the nation's capital, there's no alternative.

On the other hand, the Hawks will be facing LeBron James & Co starting Wed 20 May. In the series just completed, Atlanta managed to win three games in a row after falling behind in the beginning. They turned up their defensive intensity and were fortunate enough to avoid dealing with John Wall, who was out of Games 2, 3, and 4 with a broken hand.

The clinching victory was a collective effort, of course, and featured DeMarre Carroll setting a new playoff career high with 25 points. His aggression offensively propelled the Hawks, and with Jeff Teague tossing him the rock, Carroll made two crucial baskets at the end of the game to secure the victory.

So, the stars have aligned in the East, with the two top seeds matching up.

Should be a riveting series.

If only Kevin Love could be a part of it.