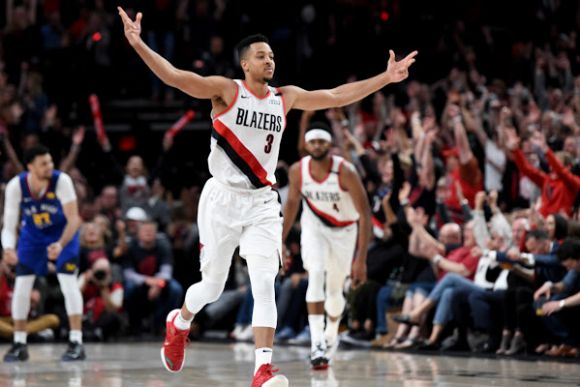 The city's slogan is Keep Portland Weird, and their hoopsters did their part in this one.

Not since 1953 -- when the Boston Celtics survived the Syracuse Nationals --has the NBA seen a four-overtime playoff game.

Odds are none of the players involved in Portland's 140-137 marathon victory over Denver ever want to see one again.

Incredibly, the Nuggets' Nicola Jokić logged damn near 65 minutes on the night, because if he didn't, the Trail Blazers woulda taken this one in a more normal time frame. The ultra-tough Serb rang up 33 points, 18 rebounds, 14 assists, and two blocks to keep Denver in the hunt.

Still, when the 88% FT-shooter only make 1-of-2 in the fourth OT, it could well have been his legs had finally become overfatigued.

That wasn't an issue for Rodney Hood.

Dude had been recharging on the bench since giving Enes Kanter a half-minute breather in the first overtime.

Soon as I saw that gallop in Rodney Hood’s step as he checked in the game you knew it was over. pic.twitter.com/wnvAtstJRA

The dude for Portland, though, was CJ McCollum. His 41-point effort was only part of his impact, but it obviously figured prominently in the proceedings:

With the exception of a 10-point Portland lead in the second quarter, there was little distance between the two for most of the game, and virtually every player who saw the court could pick up his next paycheck with pride.

In general, this was a smart game compared to the clash in '53:

The only 4OT playoff game in NBA history sounds like a blast pic.twitter.com/hJ1zSoDI5W

In this, the second four-overtime game, it's not that the refs let 'em play, dudes were just in the rest position most of the night.

It's incredible that only one player (Gary Harris) fouled out of this game.

Throughout the night, if this game got any more in-your-face, it woulda been hockey:

Fortunately, this was Game 3, so there's no travel between its aftermath and Game 4 on Sunday. Just beds, hot tubs, massages, and whatever else those dudes do to refresh.

After this sorta fatigue, any replenishment works.