A Load of Pulpit: Pastor Mark Jackson Talks Down from on High

Published on 8-May-2014 by Xavier McSpaniel 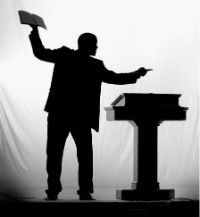 It's like arguing Donald Sterling is just a tiny bit misunderstood.

M-Jax's disdain for his former employers was crystal clear in the interview he gave to Dan Patrick:

Time heals all wounds, however. Later in the day, Jackson preached a short sermon to the faithful at the True Love Worship Center International -- the church at which he and wife Desirée serve as full-time pastors -- and it clearly demonstrated that the Hall of Fame player has already moved on.

Here's a partial transcript of his no-hard-feelings homily: