40 Years Later, Curry and the Dubs Bring Larry O'Brien Back to the Bay 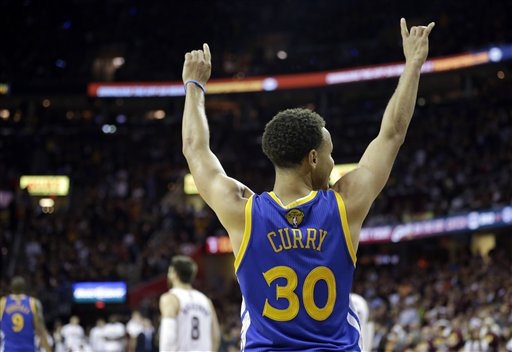 The Bay can finally celebrate.

40 years since their last title, Golden State sealed up what has been a fantastic finals series and claimed Larry O’Brien once again.

A jump-shooting team with zero finals experience on the roster overcame a ridiculous series by LeBron James and finished it off the only way it knew how, with contributions from everyone.

Think about it: the Dubs broke all the rules. Yes, they played fantastic defense throughout and were insane in terms of their team play, but up until this point, jump-shooting squads haven'tt had the greatest of times in the playoffs. Just ask Mike D’Antoni.

Golden State turned that concept on its head by having one of best shooters in NBA history and enlisting the help of selfless players. Stephen Curry led the way and made his mark in Game 6.

Does anything even need to be said?

Game 6 displayed all the issues that plagued Cleveland throughout and was a stark representation of what made the Warriors so good. Looking back, it was the closest that the Dubs got to playing a complete game, besides giving JR Smith his handy flamethrower with under a minute to play.

Dudes needed more creativity as a team than they showed. Gotta think outside the box when the rubber meets the road.

On the other side, there were key differences as to why the Warriors got a sudden burst of offense:

What has been under the radar is Klay Thompson didn't exactly have a fantastic series, aside from Game 2. In fact, he fouled out in Game 6. Dude wasn’t even rolling and almost provided more on the defensive end than he did on offense. That’s a sign the Dubs have something special. At least, according to Curry and Thompson.

Despite the loss, Cleveland does have a bright future. Just look at some of these plays LeBron made. Imagine if he had Irving next to him:

Much can be said about Kevin Love’s future and the fact that most of their veteran players will zoom off to retirement and enjoy the warm beaches in the Bahamas. But the truth is this team discovered they have something in Matthew Dellavedova and Tristan Thompson. Question is, can they keep Thompson? There will be serious money shelled out in the next few weeks. Many crossroads lie ahead, but turns out having LeBron is a nice card to have in your hand.

One more dunk from James for good measure:

LeBron outran Iguodala and Curry. Cleveland will be just fine.

It was the perfect way to end a season. This series was more competitive than most expected, and each installment was like an episode of Game of Thrones, minus the heartbreaking deaths. Seriously, look back at each individual game; there were no boring moments. All were just that good.

See you in three months, NBA. Rest up and come back with more of the same.