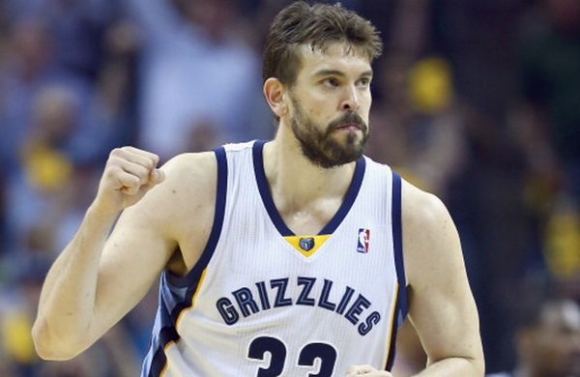 That’s right, Marc Gasol has decided to stay with the Grizzlies for the next five years, signing a contract worth north of $100million.

Does this shock anyone? Absolutely not. Gasol made a point late last season that Memphis was most likely his destination. Hell, he didn’t even meet with any other teams to hear pitches. As he said, leaving Memphis was never an idea in his mind.

There were teams, like the Los Angeles Lakers and New York Knicks, who thought they had a chance to pry him away from the grit and grind. But they never truly had a chance. It was just a matter of Memphis getting down to business and hashing it out.

That mid-range stroke is a thing of beauty.

So, Gasol is committed, but can Memphis now hold up their end of the bargain?

That being said, Memphis has locked up Gasol, and while Conley wants to wait to sign an extension, the Grizzlies will most likely sign him up, too.

Those two players are obviously the most important for the franchise; it’s just a matter of finding the teammates to put around them. Watch how many times Gasol helps free up Conley with a screen or throws him an outlet pass:

It’s obvious that with Conley healthy, the way the Grizzlies play is crippling to opponents.

However, is their play style going to need to shift for the future? The league is looking at the Warriors and realizing that going small and playing fast is extremely effective. We all know that teams copy each other; Golden State is just the most recent example of it.

Seriously, Memphis is going to need to get faster.

These are the questions the Grizzlies must answer and answer soon. Similar to their toughness, the organization and coaching staff has built a stable environment and has ensured that their most important player sticks around for the rest of his prime.

Now, Memphis just has to keep up with the stellar lineups and the bloodbath in the Western Conference.

But, tackling the future just got a lot easier, because Gasol is staying. Memphis fans, you have every right to feel groovy.