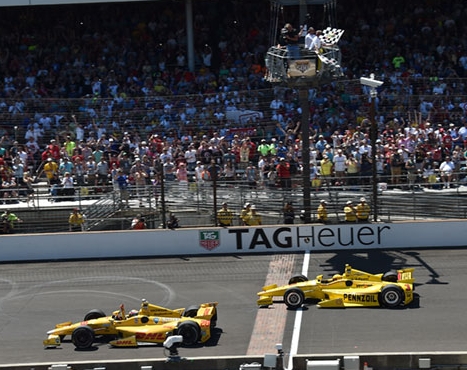 Yes, Ryan Hunter-Reay became the first American to win the Indianapolis 500 since Sam Hornish Jr did it in 2006.

And yes, runner-up Helio Castroneves was only six-tenths of a second behind, which -- at 200mph-and-then-some -- almost brought Einstein's time-space continuum to the earth's surface.

But what those who watch open-wheel racing only once or twice a year want to see is detritus. Lots of detritus.

And for them, patience was a virtue.

It took a race-record 150 laps before the term contact appeared on the score sheet. It moved 19-year-old rookie Sage Karam to hint that he'd never even seen anything like that on the Interstate:

But then, Charlie Kimball thoughtfully surrendered himself for the cause, allowing the rook and everyone else to de-tangle:

But the ironic crash happened in the 176th lap, when James Hinchcliff had the temerity to take a car sponsored by Fuzzy's Vodka out of the running. That happened to be Ed Carpenter's ride. The good news was, at least this time, he wouldn't have to pay for the repairs:

The key crash, though, was Townsend Bell's in Lap 191, because it's what set up the nine-lap sprint to the finish by Hunter-Reay and Castroneves:

In all, the race featured 34 lead changes involving 11 drivers.

The point of course, is not to crash, and at the end, that's where the real show happened:

During that final loop, Hunter-Reay hit the radar at 220.927mph compared to Castroneves' 220.729. That was the difference between self-drenching in milk and saying it sucks to finish second.