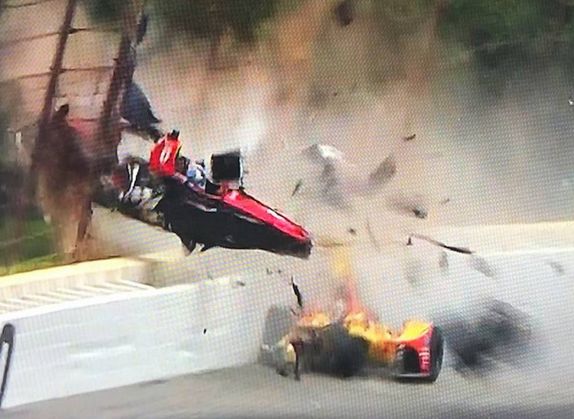 Seriously, how'd dude even survive this?

It's an understatement to say Robert Wickens is one busted-up Canadian, but at least he's still among us.

The lengthy list of bodily damage that was first released even included a bruised heart.

Could be a while before Wickens can really appreciate it, but he's one lucky human. Collisions like this are usually done with CGI for the Fast & Furious films:

This happened on Lap 7 of the ABC Supply 500 at Pocono.

Wickens was trying to go under Ryan Hunter-Reay’s Honda at Turn 2, but the cars shared a quick kiss at 200mph, which is how Wickens would up going over instead.

After a two-hour delay to make basic repairs -- and not to the satisfaction of most drivers -- Alexander Rossi will go down in the books as being first to the checkered flag.

However, only his family, friends, and trivia buffs are gonna remember it.

Takuma Sato, Pietro Fittipaldi, and James Hinchcliffe were also knocked outta the race because of the crash, but they've all been medically cleared.

Here's another view from various angles that underscore the violence imparted and absorbed:

It'll be a long while before Wilkins gets news like that, but at least it's expected that one day, he will get it.

And with the knowledge that, yet again, real life upstages fantasy.