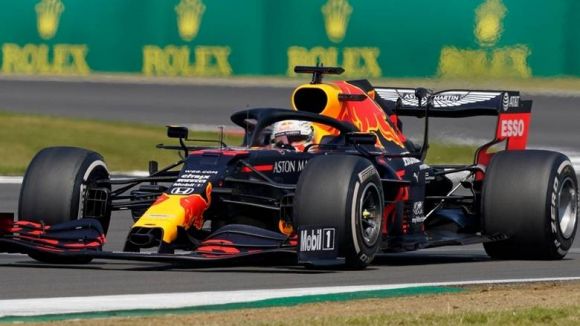 A funny thing happened to the Mercedes team on the way to its second Grand Prix victory in two weeks at Silverstone.

After cruising to a 1-2 finish in the British Grand Prix at the famed Northamptonshire track last weekend, Lewis Hamilton and Valtteri Bottas got a bit of a surprise today.

As a result, today's 70th Anniversary Grand Prix on the track Mercedes dominated seven days before found the Dutchman on the podium's peak. In so doing, someone other than Hamilton or Bottas actually won a Formula 1 race this season.

Mark this one down to superior research.

Given the sweltering conditions, Red Bull decided to go with hard compound tires instead of the mediums selected by Mercedes. The difference in wear turned out to be pronounced, and Verstappen did the rest by attacking the track and his opponents with abandon.

The team radio message that every F1 driver wants to hear 🎧

Given that sorta free rein, Verstappen was -- as they say -- off to the races.

Tire temperature was huge, so much so that Hamilton feared at one point, one of his would explode. The 22-year-old Verstappen sensed that apprehension and made totally clear to his crew that he wasn't gonna let a golden opportunity to conquer Mercedes go wanting.

Dude obviously hasn't delved deeply enough into rock-&-roll history to realize that some little old ladies feel the same way he does.

However, he definitely knew how to start from the fourth position and track down a struggling opponent, and when both Hamilton and Bottas hit the pits on Lap 13, Verstappen took the lead. When he did break for new tires halfway through the race, he returned to the track just behind Bottas.

It didn't take too many corners before he was back in command.

Both Verstappen and Bottas came in with 20 laps to go, but Hamilton stayed on the track despite his tires.

He finally pitted with nine laps remaining, and the new rubber enabled him to track down Bottas for second place, but the Dutchman was long gone.

His margin of victory was 11.3 seconds.

Hamilton's finishing in the money added to his impressive list of achievements:

Grandma's not listed, but that young whippersnapper better know that she had her day, too.