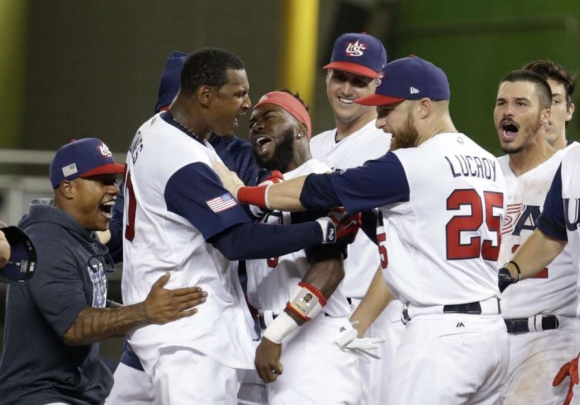 The World Baseball Classic sorta starts like a 220- or 440-yard dash in track.

It's got a staggered start with the first turn coming up quickly.

The Asian sector just wrapped its first round -- complete with a surprise -- as the Western Hemisphere's games got underway.

Team USA has done its share of staggering in this event, too. In the previous three tournaments, the best the American have ever finished was a 2009 semi-final loss to two-time winner Japan.

This time, the USA came loaded to bear, with a roster of full-fledged stars. Dudes like Giancarlo Stanton, Paul Goldschmidt, Andrew Miller and many more have assembled to bring home the trophy to the country that birthed the game.

While Team USA’s Group C draw saw them stuck in with previous champ Dominican Republic. The other two nations -- Colombia and Canada -- offered the Americans a seemingly decent chance to advance.

However, USA baseball never does anything nice and easy.

Other than dude and Atlanta's Julio Teherán, Colombia's roater is composed mostly of minor leaguers.

The early goings saw a pitcher’s duel between Archer and Quintana, both of whom held the other team scoreless for 4 and 5⅔ innings respectively. Once Archer left the game, though, Colombia was able to pound out two runs on a series of doubles in the fifth.

The USA matched that in the sixth, once they got Quintana out of the game. The first run saw an Adam Jones double, driving in Brandon Crawford as well as moving the tying run over to third base. Then, with two out and the tying run 90 feet away, Nolan Arenado strode to the plate:

The wacky strikeout/passed ball/slide into first base enabled the Americans to even the game at 2. This set the stage for extra innings.

With that wacky 11th-inning rule looming -- seen in high schools and kids' baseball damn near everywhere -- it was up to the USA to preserve the tournament's dignity and to finish the job before it came to that.

An Ian Kinsler groundout moved both men up into scoring position, leaving it up to Adam Jones to come up big for his country yet again.

Down 0-2 in the count, Jones smacked a walkoff single into the gap, helping the Americans survive their scary opener, 3-2.

Jones's feat conjured memories of David Wright's single in 2009 to lead the USA past Puerto Rico.

With an equally -- if not more -- loaded Dominican Republic team up next, the Yanks can’t afford another disappointing performance.

Not if they want to actually become a legitimate challenger for the championship.