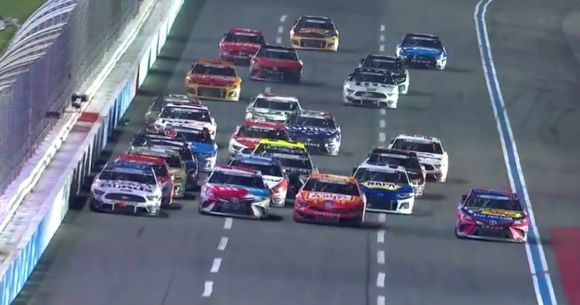 NASCAR's longest race was decided by one of its widest finishes when Martin Truex Jr took an inside track.

That ballsy last-lap move was the clincher to win a Coca-Cola 600 that featured bangin'-&-clangin' at its best.

Dude was a willing participant, too, as he even found the wall and stripped out a tire all by himself.

It sorta seemed like Truex just dicked around in the early going, trying to stay in the race until it was time to separate the wheat from the chaff.

So the field divvied up the championship points in the first two stages before Car No 19 started to sniff the finish line: And sniff it he did.

Stuff just happens in this race that boggle the mind.

Who in their freeway-driving history coouldn't look upon Truex's move with awe?

That'd be a holiday weekend wet dream on the Interstate.

Truex has now won three races in the 2019 season, and this was his second career Coca-Cola 600 triumph.

The stats say he led 116 of the 400 laps, but his grip -- given the tire wear, literally -- never seemed assured until he broke from the pack at the end and outmaneuvered Joey Logano.

In short, it was a wild ride from start to finish. Something you'd best not try at home.

Then again, why start now?