Tony Stewart Gender-Bombs, Income-Bombs, and F-Bombs Joey Logano for Being a Sunday Driver 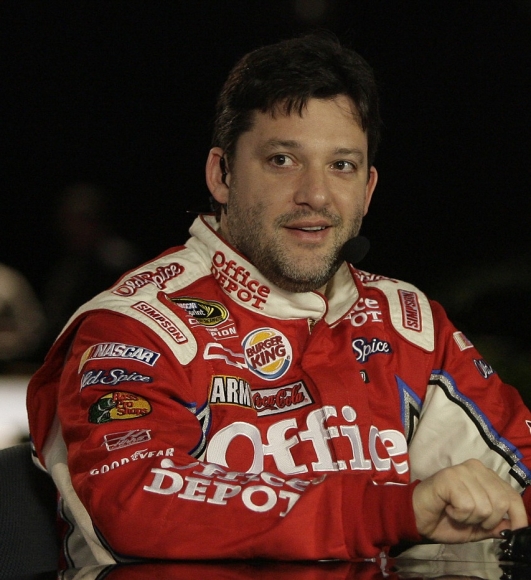 Who says NASCAR is boring? Nothing is boring when good ol' boys get in their rides and start making left turns all day.

One facet that keeps this sport interesting is its rivalries, and one of those ratcheted up a few more notches yesterday between Tony Stewart and Joey Logano.

Stewart, who has never been the most likable guy in the sport, cussed out Logano after the race in Fontana.

Logano caused a wreck Sunday that took out Denny Hamlin, which earned Hamlin a ride to the hospital. Hamlin reportedly now has a fractured back.  Stewart almost sought out microphones and cameras afterward – secure in the fact that video editors at the ready to replace expletives with beeps – declaring to all and sundry he has had enough of Logano's ‘little rich kid’ antics on the track and then told him so straight up.

No idea as to how many bar fights Stewart’s had, but he definitely didn’t see Logano’s tactics as a manly man’s maneuver in moments of physical dispute, loudly commenting, "He threw a water bottle at me like a little girl.”

It's clear Stewart needs to brush up on what a few decades of Title IX have done for women's sporting skills.

"It's time he learns a lesson," Stewart continued. "He's run his mouth long enough and done this double standard, but he's nothing but a little rich kid who has never had to work in his life."

Stewart basically promised that Logano is going to get a taste of his own medicine, and soon, in a future race. And anyone who even casually follows NASCAR knows that when Tony Stewart makes a threat, it's usually kept. In an unusual twist for Stewart, this time he had most of the other drivers agreeing with him.

Oh, and in other NASCAR news, Kyle Busch won the race.

Who would have thought the bad boy of NASCAR would come out of all this looking like the sensible adult?