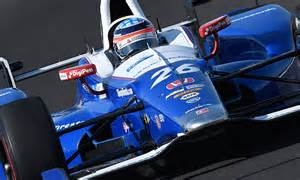 Dude must've felt like he won the Honda lottery.

Those engines haven't had the best of times this year in Formula 1, and they were almost predictably falling apart in Indianapolis.

But Japan's Takuma Sato -- a virtual 40-year-old afterthought in the Andretti Autosport camp -- kept his in one piece when it counted at the Brickyard to claim the 101st running of the Indy 500.

Obviously, dude kept his car intact, too, which is more than he could say in 2012.

That's when he attempted a similar passing maneuver at Turn 1 on the last lap and said hello to Mr Wall:

The Andretti family had to be pinching themselves after watching three of their drivers succumb to Honda's foibles:

Still, he's living -- thankfully -- proof of the Angry White Dude's contention that this stuff is harder than it looks.

It was Alonso who carried the Andretti hopes and many of the pre-race headlines.

The popular Spaniard was in the midst of a so-so Formula 1 season, so over the ocean he came, bringing a massive Euro-bump of publicity with him. He was definitely up to the idiosyncracies of oval racing, and gave himself every chance to reach the winner's circle.

In the end, though, this was Sato's day.

And when he cut by Hélio Castroneves at the end, the Japanese broadcasters made sure everyone waking up in the Land of the Rising Sun knew it:

Sato now has a grand total of two Indy Car victories -- the other was at Long Beach in 2013 -- and Andretti now has two wins in a row at Indy, three in the last four years, and five overall.

Honda will be celebrating their end of the deal, of course. However, the reality is Sato just helped them put lipstick on a pig.