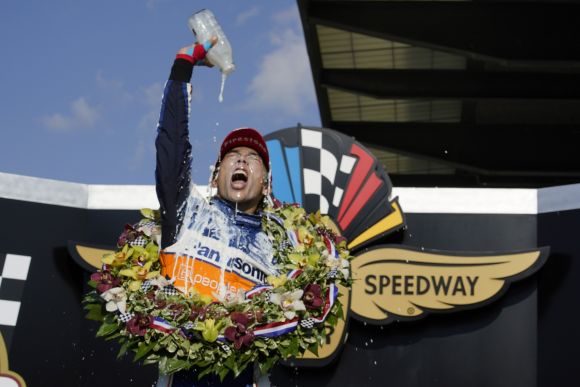 What else would we expect outta the Year from Hell?

The Greatest Spectacle in Racing not only had to squeeze itself into the day's headlines, it had an ending that just sorta fits in with everything else that 2020 has come to be.

There aren't many buzzkills like an Indianapolis 500 winner cruising through the brickyard to finish under cover of a caution.

That's what happens when Covid-19 forces it outta the Memorial Day weekend, like it did everything else.

For Takuma Sato, though, it was worth the wait.

Dude just picked up his second bottle of milk after spending all but the final five of the track's 200 laps doing battle with a hard-charging Scott Dixon. It was a bitter pill to swallow for the 2500 drama-seeking enthusiasts allowed into the world's largest racing venue -- capacity 300,000 -- not to mention Dixon himself after leading for 111 laps.

But it was Sato being lifted into Roger Penske's new elevated winner's circle for the second time in four years:

.@TakumaSatoRacer is a two-time #Indy500 winner, and he's loving that milk! pic.twitter.com/Cb7QI71kj5

Dude wound up doing a 180º when his ride's rear slid wide coming outta the curve. His front-left wheel then struck the outside wall, followed by a second crunch that spun the car back across the track and into the attenuator at the end of the pit wall:

Pigot credited the aeroscreen for helping him walk away from the crash.

Ever the traditionalist, that assured Sato of the victory. The Brickyard frowns upon gimmicks, and that's what its caretakers consider NASCAR's two-lap overtime way of avoiding finishes under caution.

So all Sato needed to do was enjoy the scenery, if a sea of empty seats can be called that.

Marco Andretti was the pole-sitter, but that didn't last long. Dixon showed early and often why he'd won five races here, pulling into the lead on the first turn of the first lap.

Andretti ultimately faded to 13th, extending his family's losing streak at the Brickyard to 51 years.

All in all, it wasn't the best of days for his Chevrolet or any other. Once again, Honda ran rings around them. Literally.

Meanwhile, in the name of tradition and the electric anticipation a buzzing Brickyard atmosphere brings, Memorial Day 2021 can't come soon enough. Unless, of course, Covid-19 says it's still too soon.